Google is reportedly working to speed up install times of software updates on Pixel smartphones. 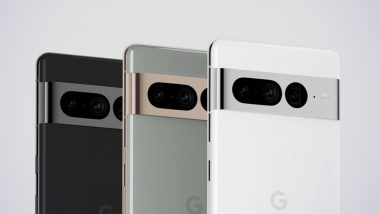 The tech giant has been adjusting the update procedure ever since the debut of Seamless updates with Android 7.0 Nougat (Android operating system). With the help of these upgrades, the Pixel now downloads a software update in the background on a secondary virtual system partition and switches to it with a reboot, cutting down the total downtime to a few minutes.

Google is also working on a compression approach to accelerate the installation of OTA updates on hardware. The enhancements can lower the time it takes to complete an OTA install by as much as ten minutes, the report said. Google Introduces Host of New Features for Android and Wear OS, Check Them Out Here.

In October, the tech giant had introduced a new feature called "Clear Calling" in its latest beta update for Pixel 7 series users to improve call clarity. The call quality enhancer was available for those who download the Android 13 QPR1 (Quarterly Platform Release) beta 3 software update.

(The above story first appeared on LatestLY on Dec 05, 2022 01:08 PM IST. For more news and updates on politics, world, sports, entertainment and lifestyle, log on to our website latestly.com).