The new Honor V40 is expected to be launched by early next year. The company might introduce three variants - V40, V40 Pro, and V40 Pro+. 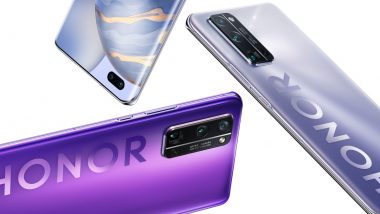 Honor, the recently sold sub-brand of Huawei is expected to launch the Honor V40 series in the home market. Ahead of its launch, the phone has been spotted on the Chinese 3C certification site revealing some key details prior to its launch. The new Honor V40 is expected to be launched by early next year, reportedly in January only. Honor 10X Lite With Kirin 710A SoC Launched Globally.

Under the new V40 series, the company might introduce three variants - V40, V40 Pro, and V40 Pro+. The latest listing on the certification website suggests that the regular V40 variant will get 66W fast charging support. However, the listing did not reveal battery specifications.

Talking about the specifications, the Honor V40 series reportedly might sport with similar features as that of the Mate 40 series. According to a tipster Rodent950, the V40 series is expected to sport a 6.72-inch FHD+ curved display with a pill-shaped camera cutout for dual cameras up front.

Under the hood, the Honor V40 Pro might be powered by the latest Kirin 9000 chipset. However, there are speculations in the market that the company might use a MediaTek Dimensity 1000+ chipset for powering the Honor V40 Pro+. Moreover, the V40 Pro might feature triple rear cameras, while the V40 Pro+ could come with a quad-camera module. The upcoming Honor V40 series is likely to feature a 50MP primary camera.

Alongside 66W SuperCharge wired fast charging, the Honor smartphones could come with support for 40W wireless charging support. More details about the phones are expected to be revealed as the launch nears.

(The above story first appeared on LatestLY on Dec 21, 2020 08:47 PM IST. For more news and updates on politics, world, sports, entertainment and lifestyle, log on to our website latestly.com).