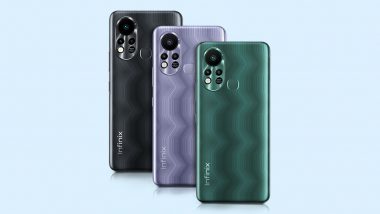 The Infinix Hot 11 series is all set to be launched tomorrow in India. The Hong-Kong based smartphone maker will officially announce prices of the Hot 11 series at noon. The Hot 11 series reportedly will comprise two variants - vanilla Hot 11 and Hot 11S. Both the variants were recently spotted on Google Play Console, revealing key specifications ahead of the launch. It's worth noting that prices, availability and other details regarding the Hot 11 Series will be announced tomorrow. Infinix Hot 11S To Be Launched in India on September 17, 2021.

Moreover, a microsite on Flipkart is already live, revealing some of the specifications. It also confirms that it would be sold online exclusively via Flipkart. The new Hot 11 Series will come as a successor to the Hot 10 series.

If the rumour mills are to be believed, the Infinix Hot 11 series will employ a MediaTek Helio G88 SoC. The same chipset is also offered on the recently launched Redmi 10 Prime.

If you're having relationship problems I feel bad for you son! 😈😈

Time to #FastForward to the all new Infinix #HOT11Series...

The upcoming Hot 11 S is tipped to get a 6.82 FHD punch-hole display. Under the hood, there will be a MediaTek G88 processor. However, details about RAM and internal storage are not available yet. For photography, it could get a triple rear camera module with a 50MP primary lens.

Based on the Google Play Console listing, the Infinix Hot 11 will sport an FHD display with a waterdrop notch carrying a resolution of 1080x2408 pixels. It will draw power from the MediaTek Helio G88 SoC, coupled with 4GB RAM. Both the phones are expected to run Android 11 OS out of the box.

(The above story first appeared on LatestLY on Sep 16, 2021 11:43 PM IST. For more news and updates on politics, world, sports, entertainment and lifestyle, log on to our website latestly.com).