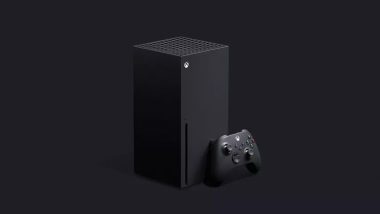 San Francisco, Aug 10: Microsoft is expected to unveil its second, cheaper next-gen Xbox console this month and a report claims it would be called Xbox Series S. According to The Verge, some new photos of Microsoft's new next-gen Xbox controller in white have appeared, with packaging that mentions the Xbox Series S. After Microsoft, Facebook Criticises Apple For Restricting its Gaming App.

The packaging notes that the controller works on Xbox Series X, Series S, Xbox One, PC, Android and iOS devices. However, Microsoft has not officially unveiled an Xbox Series S yet, nor has the company even confirmed a white Xbox Series X controller.

A mysterious white Xbox Series X controller also appeared online last month, complete with the new D-pad, textured triggers, and new share button. Microsoft will reportedly unveil the console in late August. It follows comments made by Phil Spencer, vice president of gaming at Microsoft, that the company will unveil more details about the Series X in August. The Xbox Series S has been given the codename "Project Lockhart" and has long been assumed to be the cheaper alternative to the Xbox Series X.

(The above story first appeared on LatestLY on Aug 10, 2020 04:13 PM IST. For more news and updates on politics, world, sports, entertainment and lifestyle, log on to our website latestly.com).