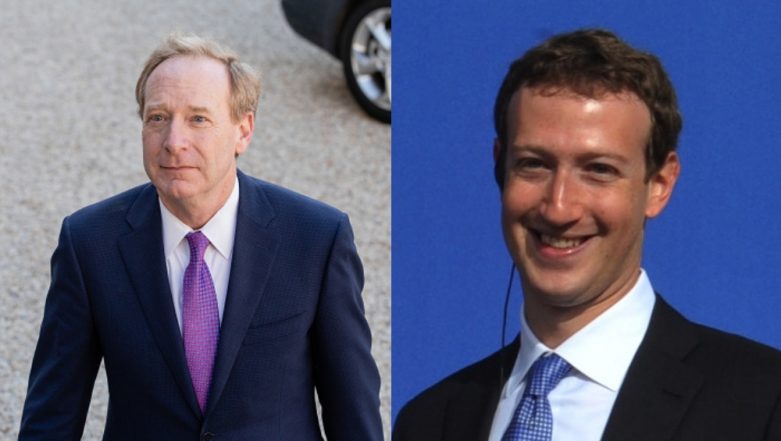 San Francisco, May 22: Mired in several privacy scandals, Facebook must hire Microsoft President Brad Smith as its new CEO as it is right time for Mark Zuckerberg to step down, a former Facebook security chief has stressed.

Speaking at the Collision Tech Conference in Toronto on Tuesday, Alex Stamos said Zuckerberg needs to give up some of his control of Facebook and hire a new CEO, reports CNN. Mark Zuckerberg-Owned Facebook Not Sharing Key Disinformation Data With European Union: Report.

"There is a legitimate argument that he has too much power. He needs to give up some of that power," Stamos was quoted as saying. "Facebook needs to have an internal revolution on the culture of how products are built. If I was him, I would go hire a new CEO for the company," Stamos said, adding Smith could be a good fit as an "adult who has been through this before".

Stamos, who was a key figure in the fight against the spread of fake news and misinformation, quit Facebook in August last year and join Stanford University as a full-time teacher and researcher.

In a recent opinion piece in The New York Times, Facebook Co-founder Chris Hughes said the government must hold Mark (Zuckerberg) accountable, adding that it is time to break up the social networking giant.

Zuckerberg is also working as Chief Product Officer after the recent departure of Christopher Cox. Both Zuckerberg and Chief Operating Officer Sheryl Sandberg have said that breaking Facebook won't serve any purpose.

"You could break us up, you could break other tech companies up, but you actually don't address the underlying issues people are concerned about," Sandberg told CNBC. Several US Senators have also called for breaking up the social network amid repeated data breaches and privacy violations on the platform.

Democratic presidential candidate Senator Kamala Harris has stressed that authorities should take a serious look at breaking up Facebook as the social network platform is a "utility that has gone unregulated".