Moto G52 India launch has been set for April 25, 2022. The company teased the handset on its official Twitter account, revealing its launch date. 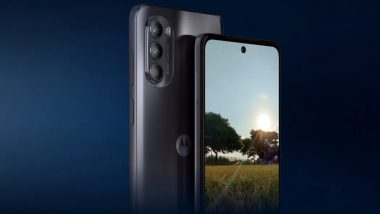 Moto G52 India launch has been set for April 25, 2022. The company teased the handset on its official Twitter account, revealing its launch date. The smartphone has also been listed on Flipkart, which confirms its availability via the e-commerce platform. Earlier today, the specifications and price of the Moto G52 were leaked online. Let's take a look at some of its key features. Moto G52 India Price Leaked Online Ahead of Its Launch: Report.

Moto G52 could feature a 6.6-inch FHD+ pOLED display with a refresh rate of 90Hz. It is said to be powered by a Qualcomm Snapdragon 680 SoC paired with 6GB of RAM and 128GB of internal storage.

Amplify your style and make the world #GoWow! Launching on 25th April on @Flipkart https://t.co/RaskDMvu7L pic.twitter.com/6T3VNh14HH

For clicking photographs, the device might feature a 50MP primary camera, an 8MP wide-angle lens and a 2MP macro snapper. Upfront, there could be a 16MP selfie snapper.

Tipster Yogesh Brar has revealed the pricing of the Moto G52. According to Brar, the handset will be sold at Rs 17,999. The smartphone box carries a price tag of Rs 19,999. Moreover, Moto G52 is said to be fuelled by a 5,000mAh battery with 33W fast charging support and will run on Android 12 OS.

(The above story first appeared on LatestLY on Apr 19, 2022 05:09 PM IST. For more news and updates on politics, world, sports, entertainment and lifestyle, log on to our website latestly.com).