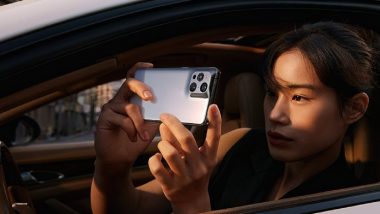 The company said the gray shade is inspired by outer space and the phone's rear panel is made of high-fog AG Glass with metallic luster to achieve the texture of the materials from outer space, reports GSMArena. Oppo Reno6 Pro, Reno6 Pro+ New Specifications Leaked on Weibo: Report.

The back cover of the Exploration Edition also has Mars 2021 and Utopia Planitia inscribed, with the latter being the name of the Tianwen-1's landing site on the Red Planet. Additionally, the Find X3 Pro Mars Exploration Edition comes with three Mars color filters that help you make the photos taken on Earth get a Mars-like look.

The Tianwen-1 probe touched down at its pre-selected landing area in the southern part of Utopia Planitia, a vast plain on the northern hemisphere of Mars, at 7.18 a.m. (Beijing Time) on Saturday.

It took ground controllers more than an hour to establish the success of the pre-programmed landing. They had to wait for the rover to autonomously unfold its solar panels and antenna to send the signals after landing, and there was a time delay of more than 17 minutes due to the 320-million-km distance between Earth and Mars.