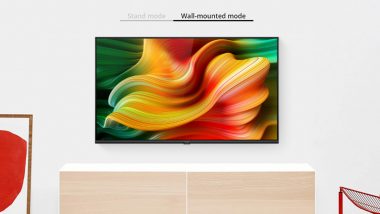 Realme, the Chinese technology brand entered into the Television segment by launching its first Smart TV in India last month. The recently launched Realme Smart TV will be made available for online sale for the first time since its launch. The Smart TV is slated to go on sale via Flipkart and Realme.com on June 2 at noon. Moreover, the company also confirmed that the Smart TV will also be made available through offline retailers. Realme 6s Sporting a 48MP Quad Rear Camera Setup Launched; Check Prices, Variants, Features Specifications.

Enter into the brighter world of #RealPicture quality with Chroma Boost Picture Engine & peak brightness of up to 400nits, with #realmeSmartTV.

Talking about the specifications, the Realme Smart TV will be made available in two sizes, wherein the resolution also varies according to the variant. The 32-inch variant of the Realme Smart TV comes with a resolution of 1366x768 pixels which is HD-Ready whereas the 43-inch variant offers FHD resolution of 1920x1080 pixels. Apart from the screen size and resolution, both the models feature the same set of specifications and features. Running Android TV 9 Pie OS, the Smart TV comes loaded with Google Play Store featuring apps like Netflix, Amazon Prime Video, and YouTube.

(The above story first appeared on LatestLY on Jun 01, 2020 07:40 PM IST. For more news and updates on politics, world, sports, entertainment and lifestyle, log on to our website latestly.com).