Beaver Moon 2020 Date: All You Need to Know About The Full Moon of November That Forms a Penumbral Lunar Eclipse 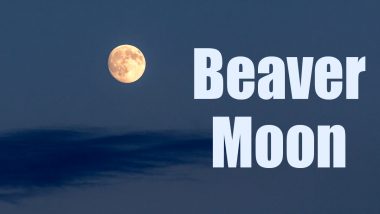 Are you a lover of the moon? Do you look forward to watching out satellite in the night sky and enjoy its phases through the month? Then it is time for the next full moon. The full moon of November 2020 is special as it brings with it the penumbral lunar eclipse occurrence. This month's full moon is called as the Beaver Moon and it will shine bright on the night of November 30. So ahead of this full moon, let us understand all details about its timings, peak and also about the penumbral lunar eclipse occurrence.

Beaver Moon 2020 will grace the skies on November 30, Monday. It will be at its full peak at 14:59 PM IST. You can watch it just as clearly during the next few nights. Hunter’s Blue Moon 2020 Pics & Videos: Check out Breathtaking Photos of the Mysterious Halloween Full Moon Going Viral on Twitter.

During its phase of the full moon, the satellite will pass through the Earth's penumbra (outer shadow). So it is called as the Penumbral Lunar Eclipse. This will also be the last lunar eclipse of the year 2020.

Each full moon names has it origins to the Native indigenous tribes who used the lunar phases to understand the weather changes. As per the Farmer's Almanac, Beaver Moon gets its name from the beaver animals. During this time of the year, they begin to take shelter in their lodges, having laid up sufficient stores of food for the long winter ahead. Colonial Americans carried on with it, because at they would go hunting for these animals for the fur trade.

Now each moon has more than one names. So Beaver Moon is also called as "Frost Moon" or "Freezing Moon". Another name for it is "Digging Moon" when animals would dig into the ground in search of nuts. So be prepared to watch the night sky at this month end to catch on the second last full moon of this calendar year.

(The above story first appeared on LatestLY on Nov 25, 2020 06:44 PM IST. For more news and updates on politics, world, sports, entertainment and lifestyle, log on to our website latestly.com).