In 1962, Jockey was commissioned with manufacturing undergarments that astronauts can wear on mankind's first-ever trip to the moon. On July 20, NASA's Apollo mission will complete 50 years. 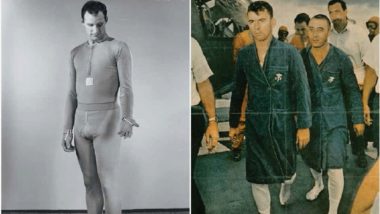 Jockey is celebrating 50 years of sending humans to the moon in comfortable innerwear! While astronauts and scientists worked a lot to send men to the moon, Jockey also seems to have played a modest role in 'mankind's greatest voyage' on Apollo 11. And celebrating the silver jubilee of the day, Jockey has taken to social media platforms celebrating sending men to the moon in 1962 in undergarments that are unaffected by gravity. Apollo 11 was the spaceflight that first landed humans on the Moon. Apollo Mission 11 Crew Members Meet at Historic Launchpad After Fifty Years.

In a slew of Facebook posts, Jockey expressed their excitement and gratitude in having been a part of NASA's historic Apollo 11 Moon landing. Apollo 11 astronauts launched its history-making mission on July 20, 1962. One of the Facebook posts reads, "It takes courage, skill and a whole lot of luck to leave this pale blue dot behind. Find out what it took to put man on the moon. Keep watching this space for more." Another post says, Every great journey needs a great start. Over 50 years ago, Jockey engineered innerwear for the first manned mission to the moon. After all, #NothingFitsBetter than Jockey." Moon Landing 50th Anniversary: 13 Spectacular Facts About NASA’s First Moon Mission and Apollo 11.

NASA was commissioned to design undergarments for the first manned mission to the moon. Jockey engineered and designed undergarments which would not be affected by gravity. The final products were worn by American astronauts Neil Armstrong, Buzz Aldrin, and Michael Collins. Jockey's website says, "Jockey engineered & designed the product such that it would remain unaffected by gravity, and was worn by Neil Armstrong, Buzz Aldrin, and Michael Collins."

(The above story first appeared on LatestLY on Jul 18, 2019 04:55 PM IST. For more news and updates on politics, world, sports, entertainment and lifestyle, log on to our website latestly.com).