Perseid Meteor Shower in India Date and Timings: Know How and When to Watch The Brightest Celestial Shower From Mumbai, Pune, Bangalore, Delhi, Hyderabad and Other Major Cities 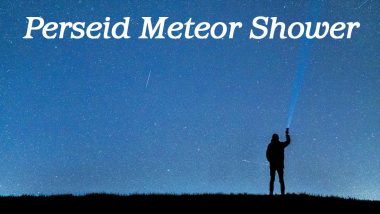 The annual season of meteor showers is here, the Perseid Meteor shower. After observing the wonderful spectacle of Comet NEOWISE last month, August brings with it the annual Perseid Meteors. If you are always on the lookout for shooting stars or meteors than tonight and tomorrow night will be the peak when people in India can observe the shimmering spectacle in the night sky. But all you can hope for is clear, cloudless skies which seems a little difficult in this rainy season. We tell you how you can watch this spectacle from Mumbai, Pune, Delhi, Hyderabad, Bangalore and other major cities. Meteor Shower 2020 Tonight Time in India: Here Are Perseid Meteor Shower FAQs From ‘What Causes Meteor Showers?’ to ‘What Time to See Perseids Today Live?’.

Perseid meteor shower is one of the most active showers and thus a popular event among stargazers. This year, Perseid meteor shower will occur on the nights of August 11 and 12, a peak on both nights post-midnight. The Perseid emerges from the comet of Swift-Tuttle, displaying a fiesta of shooting stars falling back to back in minutes. The debris particles flare-up in the atmosphere which gives an impression like shooting stars. Because it comes from the direction of constellation Persues, it is called Perseid meteor showers. It will be at its most active in India tonight and tomorrow.

Date and Timing in India

Perseid meteor shower will peak on August 11 but will be visible throughout Wednesday and Thursday, August 11-12. The best time to view it is after 2 am until pre-dawn. So in all the major cities like Mumbai, Pune, Delhi, Hyderabad and Bangalore, the best time of viewing starts after 2 am. The moonrise for all these cities is between 12.20 to 12.30 AM. Pre-dawn hours are the best time to catch a glimpse of these stars.

How to Watch The Perseid Meteor Shower?

It is difficult to get clear skies because it is rainy season across the country. But if you have access to a spot that's away from the city, with not much air and light pollution, it would be an ideal one to spot some meteors. One does not need any special kind of equipment to see the meteors. Reach the spot and lay down with your eyes up the sky, to cover a maximum area of sky in your visibility. It will take some time to adjust to the darkness of the night sky. Stay off your phone and avoid any kind of light source.

Since there is also a bright moon in the sky, it can affect the visibility of the meteors. The meteor count during the stunning celestial event of the year can go down from 60 per hour. Meteor showers are unpredictable, but on a clear night, you can expect to see meteor shower anywhere from 15 to 20 meteors per hour.

(The above story first appeared on LatestLY on Aug 11, 2020 12:41 PM IST. For more news and updates on politics, world, sports, entertainment and lifestyle, log on to our website latestly.com).