Signal to Launch WhatsApp-Like Features in Its Next Update to Attract More Users: Report

Encrypted messaging app Signal that has seen a surge in new sign-ups has introduced several features in its upcoming update that already exist in WhatsApp in an apparent bid to woo more users from the Facebook-owned messaging platform. 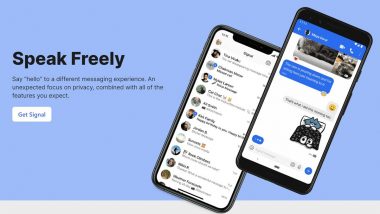 New Delhi, Jan 22: Encrypted messaging app Signal that has seen a surge in new sign-ups has introduced several features in its upcoming update that already exist in WhatsApp in an apparent bid to woo more users from the Facebook-owned messaging platform. To begin with, Signal has added a feature to change chat wallpaper. The latest Signal Beta update, released this week, includes the feature to change the chat wallpaper copied straightaway from WhatsApp, reports WABetaInfo, a website that closely tracks the Beta changes on Facebook-owned platform. Signal Messaging App Back After 24-Hour Outage, Users Might Still Face Chat Errors: Report.

WhatsApp offers a feature to set a custom "about" -- a status available in the contact info page. Signal has now introduced the same option for its users. Signal already offered group calls, but it was limited to five participants to date. Now, it has changed the limit to eight participants like WhatsApp. WhatsApp enabled the support for animated stickers last year. Now, Signal also offers the possibility to create animated stickers from its Desktop app, allowing to share them with friends, the report said on Friday.

The latest update brings the support for animated stickers, along with "Day by Day", the first official animated sticker pack. In addition, Signal is implementing a low data mode for calls already implemented in WhatsApp. Signal has implemented the possibility to create a shareable group invite link to invite other users to the groups.

The platform has climbed to the top spot in the free apps category of the App Store in multiple countries, including India after WhatsApp users worldwide started receiving pop ups, asking them to agree to its revised policies before February 8 or lose their account. The new WhatsApp policy has now been deferred till May 15. Brian Acton, who co-founded WhatsApp with Jan Koum before selling it to Facebook CEO Mark Zuckerberg for $19 billion, is aiming to add 100-200 million users in India over the next two years.

Actor, Executive Chairman of Signal Foundation who left WhatsApp in 2017 over a dispute with Facebook regarding monetisation of WhatsApp, has said that he is encouraged to see the massive outpouring of support from all corners of India. The encrypted messaging app last week suffered a massive 24-hour long outage. After experiencing technical difficulties where users were unable to send messages, the messaging app kept trying its best to revive the chats.

(The above story first appeared on LatestLY on Jan 22, 2021 05:34 PM IST. For more news and updates on politics, world, sports, entertainment and lifestyle, log on to our website latestly.com).