The upcoming Vivo Y73 smartphone has been officially teased by Vivo India Director Nipun Marya via his official Twitter account. 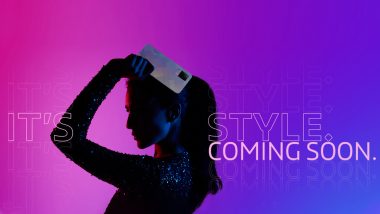 Vivo is expected to launch a new handset in the country very soon. The upcoming Vivo Y73 smartphone has been officially teased by Vivo India Director Nipun Marya via his official Twitter account. However, the company hasn't revealed the exact launch date yet. We expect it could be introduced in the Indian market very soon. The image of the smartphone shows it will sport a similar design as that of the Vivo V21 series. The teaser picture also confirms the presence of a triple rear camera, positioned in a rectangular camera module. Vivo Y73 2021 & Vivo V21e 5G Specifications Leaked via Google Play Console: Report.

If the market reports are to be believed, the upcoming Vivo Y73 smartphone will sport a 6.44-inch FHD+ AMOLED display with a resolution of 1080X2400 pixels. The display may feature HDR10 support and there will be an in-display fingerprint scanner. The 16MP front camera will be positioned in a water-drop notch.

The phone is likely to be powered by an octa-core MediaTek Helio G95 SoC, which may be clubbed with up to 8GB RAM and up to 128GB built-in storage. Additionally, the handset may also get the brand's Extended RAM feature that will offer 3GB of virtual RAM via internal storage.

Talking about the camera department, there will be a triple-camera module at the back. It will comprise a 64MP primary camera assisted by two 2MP sensors for depth and macro. Having said above, the phone will come equipped with a 16MP snapper.

The phone will run on Android 11-based Funtouch OS 11 out of the box. It will be backed by a 4,000mAh battery with 33W fast-charging technology. As far as prices are concerned, the phone is likely to be priced somewhere around Rs 20,999 for the sole 8GB and 128GB variant.

(The above story first appeared on LatestLY on Jun 05, 2021 11:50 PM IST. For more news and updates on politics, world, sports, entertainment and lifestyle, log on to our website latestly.com).