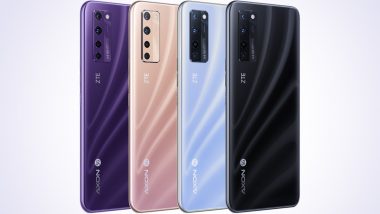 The Chinese smartphone brand ZTE on Thursday officially launched the Blade 20 Pro 5G smartphone at the China Mobile Global Partner Conference. The phone maker unveiled the handset alongside the Axon20 5G Extreme Edition. Technically, it is a high-spec version of the Blade 20 5G phone. As a reminder, the latter was launched in the home market earlier this month. Yahoo ZTE Blade A3Y Smartphone Launched at $50; Check Features, Variants & Specifications.

As far as the specifications are concerned, the newly launched smartphone from ZTE comes equipped with a Snapdragon 765G SoC. The processor is reportedly built on Samsung’s 7nm EUV technology with Adreno 620 GPU, and employs an eight-core Kryo 475 CPU with up to 2.3GHz clock speed. The company claims that the chipset can run many mainstream games efficiently and smoothly. Coming to the camera department, the phone packs a 64MP quad rear camera module. It also gets a 20MP selfie camera with AI beauty support.

On the other hand, the ZTE Blade 20 5G sports a 6.52-inch IPS LCD waterdrop screen with an HD+ resolution of 720X1600 pixels. It comes powered by a Dimensity 720 chip, based on the ARM architecture. The phone is backed by a 4,000mAh battery and it does not support fast charging. However, it comes with other features such as built-in FM radio antenna, rear-facing fingerprint sensor and more. Unlike the Pro version, the Blade 20 5G gets only triple rear cameras. It consists of a 16MP primary lens with an 8MP wide-angle camera, and a 2MP depth sensor.

It is important to note that the ZTE Blade 20 Pro 5G smartphone is offered with 6GB of RAM and 128GB of internal storage. It's also backed by a 4000 mAh battery just like the predecessor. But, it misses out on fast charging support. The phone maker hasn't announced price details of the handset yet. However, the phone is expected to go on sale from this month onwards. Moreover, the ZTE Axon20 5G Extreme Edition will also be made available for retail alongside the Blade 20 Pro 5G model. Presently, it remains unclear if either of these phones will be introduced in the Indian market.

(The above story first appeared on LatestLY on Nov 20, 2020 09:11 PM IST. For more news and updates on politics, world, sports, entertainment and lifestyle, log on to our website latestly.com).