Trump said that judicial appointments helped in moving the US to further restrictions on abortion. 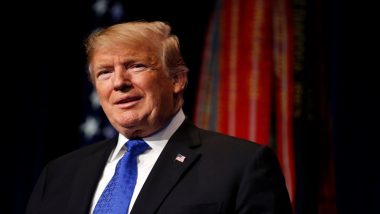 Washington, May 19: US President Donald Trump has outlined a less restrictive view of abortion than what was passed by Alabama's Republican state government. Alabama has banned abortion except if there is a "serious health risk" to the mother, with no exceptions for rape and incest. The President who calls himself "strongly pro-life", however, said late Saturday that he favours making an exception of cases of rape and incest.

"As most people know, and for those who would like to know, I am strongly pro-life, with the three exceptions - rape, incest and protecting the life of the mother - the same position taken by Ronald Reagan," he tweeted. Alabama’s Near-Total Abortion Ban Applies to Cases of Incest and Rape: Women Flood Social Media to Share Their Abortion Stories With #YouKnowMe.

Asked whether Trump would openly criticize the law, the President's 2020 campaign spokeswoman Kayleigh McEnany said she didn't know, but reiterated that "he's said repeatedly he's for those three exceptions".

Trump said that judicial appointments helped in moving the US to further restrictions on abortion. "We have come very far in the last two years with 105 wonderful new federal judges (many more to come), two great new Supreme Court justices… and a whole new and positive attitude about the right to life."

According to the President, abortion will be a major issue in his re-election campaign. "The radical left, with late term abortion (and worse), is imploding on this issue. We must stick together and win for life in 2020."

"If we are foolish and do not stay united as one, all of our hard fought gains for life can, and will, rapidly disappear," he said. Though this issue dominated headlines this week, Trump remained "uncharacteristically silent", the Washington Post reported.

But other anti-abortion conservatives say that the Alabama law goes too far. Those include televangelist Pat Robertson, who called it "extreme", and House Minority Leader Kevin McCarthy, who said it "goes further" than what he believes. Donald Trump Opposed to Parts of Abortion Ban in Alabama.

Other Republicans tried to avoid the contentious issue with many dodging questions by calling it a "states issue". The White House, when asked for Trump's opinion about the law, changed the subject to focus on Democrats and late-term abortions.

"Unlike radical Democrats who have cheered legislation allowing a baby to be ripped from the mother's womb moments from birth, President Trump is protecting our most innocent and vulnerable, defending the dignity of life and called on Congress to prohibit late-term abortions," it said in a statement.

(The above story first appeared on LatestLY on May 20, 2019 02:08 PM IST. For more news and updates on politics, world, sports, entertainment and lifestyle, log on to our website latestly.com).