Police in Indonesia have unearthed a major scam related to rapid antigen nasal swab kits, used to test if a person is infected with coronavirus or COVID-19. 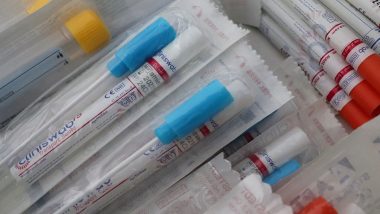 Jakarta, May 7: Police in Indonesia have unearthed a major scam related to rapid antigen nasal swab kits, used to test if a person is infected with coronavirus or COVID-19. According to a report by CNN, the scammers reused nasal swab kits, leaving up to 10,000 airline passengers at risk of contracting coronavirus. Police have arrested five employees for major Indonesian pharmaceutical company Kimia Farma in connection with the scam. Indonesia Bans Travelling Home for Eid Al-Fitr.

"They started their crime on December 17, 2020. If every day they have 50 to 100 customers, the victims number are estimated to be about 10,000," Grand Commissioner Hadi Wahyudi, spokesperson of the North Sumatra Police, was quoted by CNN as saying. The arrested employees include a business manager of Kimia Farma's Medan unit. Indonesia Approves Emergency Use of Chinese COVID-19 Vaccine.

During a raid, police recovered recycled cotton swabs, recycled packaging, and 149 million rupiah ($10,000) in cash from the possession of the accused persons. Indonesia has mandated negative COVID-19 report for domestic flyers. Passengers would pay 200,000 rupiah ($14) for each antigen test swab. The scam is estimated to have garnered thousands of dollars for the perpetrators.

(The above story first appeared on LatestLY on May 06, 2021 06:15 PM IST. For more news and updates on politics, world, sports, entertainment and lifestyle, log on to our website latestly.com).