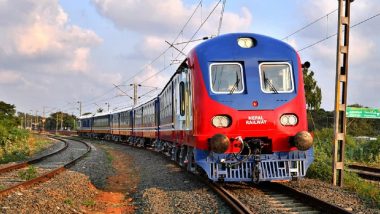 Kathmandu, September 19: Nepal has planned to resume passenger railway services after a 7-year suspension as two sets of rails that Kathmandu purchased from India have arrived in Janakpur city. "The Diesel-Electric Multiple Unit rail sets arrived at Janakpur at around 1.40 p.m. on Friday," Balram Mishra, director general at the Department of Railway told Xinhua news agency. The Railway Department said that it would take at least one and half months to restart the services as it was currently working to recruit necessary human resources.

It will be the country's first ever broad-gauge passenger railway service. The service will start from Kurtha, an area close to Janakpur town to Jayanagar, a town bordering India, and the distance is around 35 km, according to the Department. There was an operation of Janakpur-Jaynagar railway service in the past but on a narrow gauge line, and the service completely halted seven years ago. China-Nepal Railway Project: Chinese Media Releases Visuals of 'Exploration and Survey'.

In order to resume railway service, the Department planned to recruit over 200 staff gradually. "Initially, we will resume service with the help of Indian technical staff," said Mishra. "We are hiring 26 Indian staff mostly from technical backgrounds in the areas of driving, maintenance, signaling and track engineering to start the service."

He said that the Indian workforce would gradually be replaced once Nepali human resources are trained properly and adequately. According to the Department, each rail set can accommodate around 1,300 passengers with maximum speed of 110 km per hour, and it can be operated from both sides. "It is appropriate for operating inter-city services and for middle distance," said Mishra.

The government is also planning to develop a number of railways that would link the country from all four directions. The railway track is being laid to operate east-west electric railway service. Nepal has signed an agreement with both China and India to link the capital city Kathmandu with both countries' borders.

(The above story first appeared on LatestLY on Sep 19, 2020 05:05 PM IST. For more news and updates on politics, world, sports, entertainment and lifestyle, log on to our website latestly.com).