Qasim Khan Suri, Deputy Speaker of the Pakistan National Assembly (NA), on Sunday dismissed the no-trust move against Prime Minister Imran Khan, saying that it was against Article 5 of the Constitution, Dawn reported. 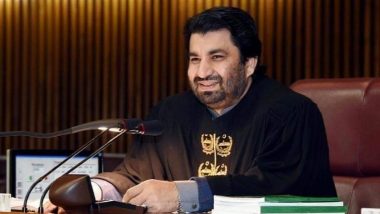 Opposition lawmakers earlier appeared confident of the success of the no-trust move as they made their way to Parliament House. The opposition needs the support of at least 172 lawmakers from a total of 342 to oust the premier through the no-trust move. Pakistan Political Crisis: PM Imran Khan Calls for Fresh Polls After No- Confidence Motion Rejected in Pak Assembly.

As the situation stands now, opposition parties have managed to cross the magical figure of 172 and enjoy the support of 174 members in the NA, according to a list shared by PML-N's Marriyum Aurangzeb on Sunday.

The number does not include over a dozen dissidents of the ruling PTI, who have already publicly declared the withdrawal of their support to the prime minister. Prior to Sunday's session of the NA, the opposition also submitted a no-confidence motion against Speaker Asad Qaiser.

The resolution, addressed to the secretary of the NA Secretariat, was submitted by Murtaza Javed Abbasi of the PML-N. The resolution carried the signatures of more than a hundred lawmakers. PPP Chairman Bilawal Bhutto-Zardari, who shared an image of the resolution on Twitter, tagged the official handles of Khan and Qaiser, with a simple "surprise".

(The above story first appeared on LatestLY on Apr 03, 2022 01:54 PM IST. For more news and updates on politics, world, sports, entertainment and lifestyle, log on to our website latestly.com).