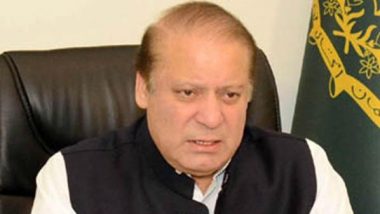 Islamabad, May 30: An accountability court in Pakistan has issued an arrest warrant against embattled former prime minister Nawaz Sharif, who is currently in London for medical treatment, for failing to appear before it in a corruption case that accused him of receiving luxury vehicles and gifts from the national treasury.

The court in Islamabad on Friday heard the case against Sharif, former president Asif Ali Zardari and former premier Yusuf Raza Gilani for allegedly receiving luxury vehicles and other gifts presented by foreign dignitaries, which were property of the state. ‘Pakistan Has No Locus Standi, Should Be Embarrassed to Even Mention Minorities’: India on Islamabad’s Objection Over Construction of Ram Temple.

The country's anti-graft body National Accountability Bureau (NAB) filed the case on March 2 and Judge Syed Asghar Ali on May 15 issued summons for the three leaders as well other accused -- Khawaja Anwar Majeed and Abdul Ghani Majeed of the Omni Group. Gillani and Ghani appeared before the court whereas Sharif and Zardari did not.

An application for exemption from appearance was filed by the former president which was granted by the accountability court. However, no one appeared on behalf of the deposed prime minister, so the judge issued warrants for his arrest.

The court directed all the accused, including Sharif and Zardari, to appear in the court for the next hearing on June 11. Earlier in January, NAB had approved filing of cases against the former heads of state for inflicting losses to the national exchequer by taking gifts from the national treasury and not depositing them in the gift depository (Toshakhana).

The NAB approved filing cases against former premiers Sharif and Gilani and ex-president Zardari for keeping the government-owned valuables and vehicles in their possession.

The NAB has alleged that Sharif and Zardari got gifted cars transferred to them by paying 15 per cent of the price, while Gilani as the premier facilitated them by dishonestly and illegally relaxing the procedure for the acceptance and disposal of gifts and thus caused a loss to the national exchequer.

Gifts are routinely exchanged between heads of states or officers holding constitutional positions. According to the gift depository rules, these gifts remain the property of the state unless sold at an open auction.

Several corruption cases have been launched by the government of Prime Minister Imran Khan against the 70-year-old supremo of the Pakistan Muslim League-Nawaz since his ouster from the office by the Supreme Court in July 2017 in the Panama Papers case.

Sharif in November last had left for London after the Lahore High Court granted him a four-week permission allowing him to go abroad for his treatment. Pakistan Criticises India for Starting Construction of Ram Temple in Ayodhya.

He had given an undertaking to the Lahore High Court to return to Pakistan citing his record to face the process of law and justice within four weeks or as soon as he is declared healthy and fit to travel by doctors. Sharif was also given bail in the Al-Azizia Mills corruption case in which he was serving seven-year imprisonment in Lahore's Kot Lakhpat jail.