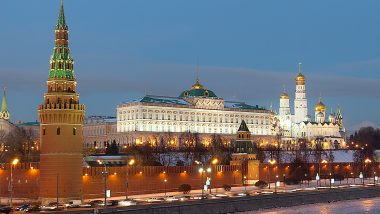 Peskov also says that, at the beginning of the war, Russian President Vladimir Putin allegedly gave the order "not to assault the cities immediately, including Kiev", Ukrayinska Pravda reported. The reason for that was "the deployment of weapons by militants in the cities". It is unclear what was meant, although Russia says it is "demilitarising Ukraine", namely destroying these weapons. Russia-Ukraine War: Yevhen Matveyev, Mayor of Dniprorudne City, Abducted by Russian Forces.

Earlier, an artillery shell hit a nine-storey apartment building in the Obolon' district of Kiev, killing two people. Ukrayinska Pravda reported the building was partially destroyed between the ground floor and the second floor, and a fire broke out on the second and third floors. There were three victims, and 17 people rescued from under the rubble.

An airstrike on the town of Okhtyrka in the northeast of Ukraine in Sumy region on Monday has killed at least 3 civilians. Pavlo Kuzmenko, Mayor of Okhtyrka said: "Okhtyrka - its residential neighbourhood, residential houses - was bombed at night. At least 3 people died, others have not been found yet. Behind me, houses are burning."

(The above story first appeared on LatestLY on Mar 14, 2022 08:04 PM IST. For more news and updates on politics, world, sports, entertainment and lifestyle, log on to our website latestly.com).