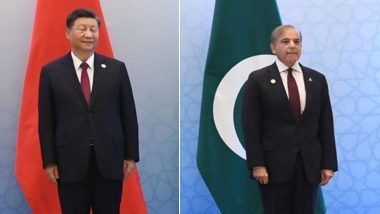 Calling the two nations "strategic partners", the President said the two sides "must continue to firmly support each other, foster stronger synergy between their development strategies, and harness the role of the Joint Cooperation Committee of the China-Pakistan Economic Corridor (CPEC) to ensure smooth construction and operation of major projects".

On his part, the Prime Minister thanked China for providing "timely and valuable" support to Pakistan in the wake of the catastrophic flooding which has so far killed more than 1,500 people and affected over 30 million others.

Calling China "an eternal, great friend of Pakistan", Sharif said his country was "firmly committed to the 'one-China policy'", and also backed Beijing's position on issues pertaining to "Taiwan, Xinjiang and Hong Kong".

Following the meeting, officials of the two countries also signed documents on cooperation in railway, e-commerce and other areas.

(The above story first appeared on LatestLY on Sep 16, 2022 03:44 PM IST. For more news and updates on politics, world, sports, entertainment and lifestyle, log on to our website latestly.com).