Around 1.2 million pigs have been culled in Vietnam due to the risk of being infected with African swine fever, the Minister of Agriculture and Rural Development said on Monday. 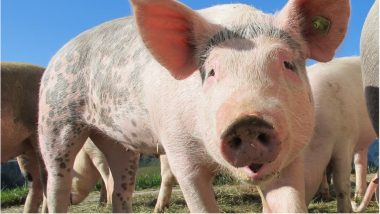 Ho Chi Minh City, May 13: Around 1.2 million pigs have been culled in Vietnam due to the risk of being infected with African swine fever, the Minister of Agriculture and Rural Development said on Monday.

Nguyen Xuan Cuong said that so far the virus had spread to 29 provinces, among them Dong Nai in the south, which is the largest supplier of pork in the southeast Asian country, according to news portal Vietnam Biz. Swine Flu Deaths in 2019: H1N1 Virus Claims Over 330 Lives Across India, 127 Killed in Rajasthan Alone.

Authorities warned against the fast spread of the virus and the difficulty in detecting it, resulting in the approval of a series of measures to prevent it from affecting more hog farms.

According to Vietnamese experts, the outbreak spread into the country from neighbouring China, Efe news reported. In Hong Kong, 6,000 pigs were culled during the weekend for being infected with the virus.

The African swine fever virus, which is harmless to humans, is a highly infectious disease for pigs and is no vaccine or medical remedy available. Since the first instances of the virus came to light in China in 2018, the epidemic has spread through the entire country, as well to neighbouring Mongolia and Cambodia, besides Vietnam, the report said.

In September, the UN Food and Agriculture Organization (FAO) called a three-day emergency meeting in Bangkok to formulate a regional response to outbreaks of the disease in China in late August.

China produces most of the pork it consumes, although it also imports from other countries like the US, Spain and Germany. Beijing authorities culled more than 40,000 pigs, according to FAO, to contain the plague that has had at least five outbreaks in August and which, in its most severe case, leads to the death of the infected animal.

African swine fever, which often affects warthogs, red river hogs (a natural pig species of the Horn of Africa) and ticks -- is not contagious to humans, but has threatened the Chinese pig market, which represents more than half of global pork production.

(The above story first appeared on LatestLY on May 14, 2019 09:01 AM IST. For more news and updates on politics, world, sports, entertainment and lifestyle, log on to our website latestly.com).