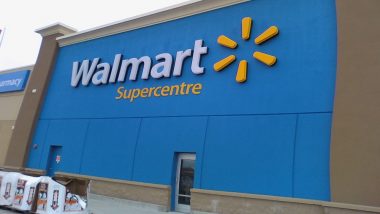 Philadelphia, October 30: Walmart has planned to remove guns and ammunition from its sales floors in the US following unrest in Philadelphia this week, according to an AFP report. Thus aiming at a potential theft of firearms if these stores are broken into amid social unrest.

A company spokesperson quoted in the report said that Walmart will continue to sell guns and ammunition to customers who request them, but will pull them from displays. These items are sold at about half of US stores, majorly in locations where hunting is popular. Philadelphia Up in Protest After Black Man Gets Shot Dead by Police, Unrest Erupts Week Before US Presidential Elections 2020.

The decision by the company comes after Philadelphia on Wednesday announced a nighttime curfew following two nights of unrest over the police killing of Walter Wallace, who became the latest Black person to die at the hands of police.

Thousands of people took to Philadelphia's streets, with looting and violence breaking out since Wallace was shot dead by police.

(The above story first appeared on LatestLY on Oct 30, 2020 07:31 AM IST. For more news and updates on politics, world, sports, entertainment and lifestyle, log on to our website latestly.com).