The Amazing Spider Man- Andrew Garfield's fans may not have a reason to rejoice as the BAFTA award-winning actor has denied all speculation of his Spider-Man: No Way Home cameo, in his recent interview. 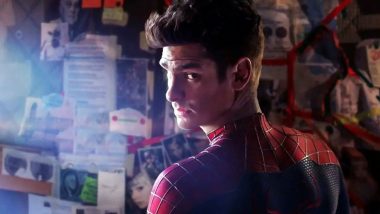 The Amazing Spider Man- Andrew Garfield's fans may not have a reason to rejoice as the BAFTA award-winning actor has denied all speculation of his Spider-Man: No Way Home cameo, in his recent interview. Movie buffs, and especially Andrew Garfield fans have been on their toes since the time the makers of 'Spider-Man: No Way Home' had announced the production of the action-adventure film. The film, which will feature the 'chocolate boy' of Hollywood- Tom Holland in the lead, sparked the rumours of having Andrew in a cameo as a treat to his fans. Tom Holland Reveals Spider-Man: No Way Home Will Be His Final Spidey Film Under Marvel’s Contract.

But according to People Magazine, in an interview with Josh Horowitz on his 'Happy Sad Confused' podcast, 'The Amazing Spider-Man' denied rumours that he would reprise his role as Peter Parker in 'Spider-Man: No Way Home' alongside Tom Holland. The 37-year-old actor first denied the rumours when Horowitz mentioned the upcoming Marvel movie, saying he did not want to "ruin anything" by spoiling his potential appearance in the film. Aside:Spider-Man: No Way Home! Tom Holland Reveals Title and Release Date of His Marvel Movie Through a Quirky Video.

"There isn't anything to ruin, bro!, I had to just quickly cut you off because there's nothing to ruin," Andrew reassured the host with a laugh. The Tony Award winner also admitted that he has seen the Spider-Man buzz on Twitter, and called it "hilarious." "It's hilarious to me because I do have this Twitter account and I see how often Spider-Man is trending and it's people freaking out about a thing... I wish I could be able to speak to everyone and say, 'I recommend that you chill!'" Andrew said.

While confirming the same, Andrew said "I would've gotten a call by now, that's all I'm saying". 'Spider-Man: No Way Home' is a continuation to 'Spider-Man Far From Home' starring Tom Holland. The film is slated for a theatrical release on December 17. It will also star Oscar-winning actor Jamie Foxx in a pivotal role.