Carol Burnett is set to appear as the guest star in the final season of the Breaking Bad spinoff, Better Call Saul. The tv show stars Bob Odenkirk as the lead role of Saul Goodman. The series finale of Better Call Saul will air on August 15. 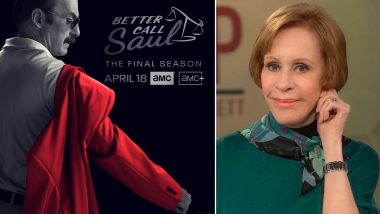 Carol Burnett is all set to appear as a guest star during the sixth and last season of Better Call Saul. According to The Hollywood Reporter, in the Sony Pictures Television series for AMC, the adored performer will portray Marion. Burnett declared in a statement that she was thrilled to be a part of her favourite show. Carol Burnett Biopic Ropes In Tara Miele as Director; Film to Be Based on Comedy Icon’s Bestselling Memoir.

Following the devastating mid-season finale, the Breaking Bad drama will conclude this summer with guest appearances by Bryan Cranston, Aaron Paul, and Burnett in the characters of Walter White and Jesse Pinkman, respectively.

The iconic comic just booked Mrs American Pie, her first series regular role in a TV series since her main role in the variety series The Carol Burnett Show, to continue her return to television. In the Apple comedy series with Kristen Wiig as her co-star, Burnett will play the lead role.

On AMC and AMC+, Better Call Saul will return for its last six episodes starting on July 11. The series finale will air on August 15. The difficult path and transition of the show's compromised hero, Jimmy McGill, played by Bob Odenkirk, into criminal defence attorney Saul Goodman will be wrapped up in the final episodes, as reported by The Hollywood Reporter. Better Call Saul: Animated Spinoff Announced for Bob Odenkirk's Breaking Bad Show; Will Be Produced by Rick and Morty Animators!