Actor Paul Bettany has said that it was strange and unpleasant having his text messages become a part of the court record during Johnny Depp's libel suit against the UK tabloid The Sun. 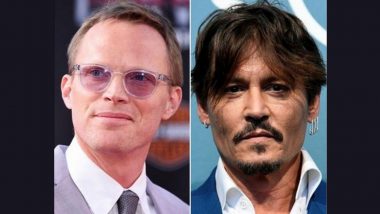 Actor Paul Bettany has said that it was strange and unpleasant having his text messages become a part of the court record during Johnny Depp's libel suit against the UK tabloid The Sun. According to The Hollywood Reporter, in an interview with a news outlet published on Saturday, the 'WandaVision' actor spoke about his long career in Hollywood, including having a producer tell him he'd never work again and explained his process for how he becomes emotional enough to cry during scenes. Janhvi Kapoor Prays at Tirumala Temple Located in Andhra Pradesh After Paying Visit to Kedarnath Shrine Last Month.

However, at one point during the interview, Bettany was asked about his 2013 text exchange with fellow actor Johnny Depp regarding the 'Fantastic Beasts' actor's ex-wife Amber Heard. These messages later became public during Depp's defamation suit against The Sun's publisher over the tabloid's use of "wife beater" to describe him. Bigg Boss 13 Fame Asim Riaz to Come Up With New Song ‘Tera Bhai’ Featuring Brother Umar Riaz.

When answering on the subject, Bettany said that it's "a really difficult subject to talk about" and noted that answering would "just pour fuel on the fire," before chalking the entire situation up to be "very strange." "It was a strange moment. What was strange about it was you suddenly have one of the most scabrous newspapers in London and their lawyers pouring through your texts for the last 10 years. Can you imagine what it would be like, honestly, to have a bunch of lawyers go through every one of your emails and texts for 10 years?" said Bettany.

He added, "All I can tell you was that it was an unpleasant feeling." Bettany's communications with Depp were included in the 132-page ruling on the case in 2020. Depp and Bettany texted about Heard, with Depp suggesting they burn her, among other graphic things, while Bettany, apparently taking it as a joke, wrote back and suggested a "drowning test" to determine if "she's a witch."

Justice Andrew Nicol dismissed Depp's libel claim in November 2020, after finding the allegations that Depp had assaulted Heard on multiple occasions and that she feared for her life were "substantially true," and opening the door for other publications referring to Depp as a wife beater to have less fear of legal retaliation.

The judge also refused permission for Depp to appeal the decision directly with the court, but on December 9, 2020, the actor applied directly to Britain's court of appeal in an effort to overturn the ruling. In March 2021, two court of appeal judges said the actor couldn't challenge the High Court's rejection of his libel lawsuit. Following the November 2020 court ruling, Warner Bros. had severed its ties with Depp, replacing him in the 'Fantastic Beasts' franchise. In August 2021, Depp said he was being boycotted by Hollywood and later in September that cancel culture had gotten "so far out of hand now that I can promise you that no one is safe" while appearing at the San Sebastian Film Festival, as per The Hollywood Reporter. (ANI)