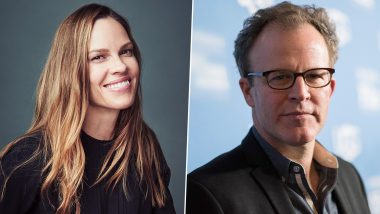 Oscar-winner Hilary Swank has been tapped to play the lead role in Stillwater director Tom McCarthy's drama pilot set at ABC network. Swank will essay the role of a star journalist who moves to Alaska for a fresh start after a career-killing misstep, and finds redemption personally and professionally joining a daily metro newspaper in Anchorage. Filmmaker Sahraa Karimi Is Doubtful If She, As a Woman Would Be Allowed to Work in Taliban-Controlled Afghan Regime.

According to Variety, the actor will also serve as executive producer on the yet-untitled show along with McCarthy. Bert Salke of Co-lab21, Melissa Wells of Slow Pony banner, and Kyle Hopkins and Ryan Binkley of the Anchorage Daily News are all on board as executive producers. Chris Brown's Security Team Files a Battery Case Against a Stranger Who Rode to the Celebrity's San Fernando Valley Home.

20th Television is the studio behind the show. The pilot marks McCarthy's first broadcast network project. He has previously penned the pilot of Showtime's Roger Ailes mini-series "The Loudest Voice", and executive produced and directed select episodes of Netflix series "13 Reasons Why".