The Indian Navy Ship Kochi on Wednesday arrived in Mumbai along with the rescued personnel from Barge P305 which sank 35 nautical miles from Mumbai due to cyclonic storm Tauktae. 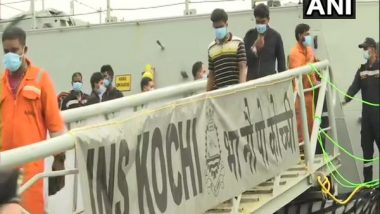 Mumbai, May 19: The Indian Navy Ship Kochi on Wednesday arrived in Mumbai along with the rescued personnel from Barge P305 which sank 35 nautical miles from Mumbai due to cyclonic storm Tauktae.

A total of 184 people have been rescued so far and as many as 14 dead bodies have been recovered from the Arabian Sea after Barge P305 sank off the Mumbai coast. The search and rescue operations are still going on. Barge P305 Crew Member Breaks Down After Being Rescued By Indian Navy After Cyclone Tauktae (Watch Video).

"Had inputs that Barge P305 was in distress, approx 35-40 miles from Mumbai. The ship sailed under very difficult conditions, the storm was just passing west of Mumbai. As we arrived on the scene we took charge of the situation," Commanding Officer of INS Kochi Captain Sachin Sequeira said.

"With others on-site, we rendered the best possible assistance for the Barge and crew. The operations are still ongoing. We have a large number of naval units on site. My ship has just come back. About 184 people have been rescued, of which 125 are on board my ship," Sequeira said.

"We are still looking out for people in the area. We should be optimistic. Right now the conditions have improved. Hopefully, the worst is behind us," he added.

The PRO of Defence Mumbai said that INS Teg, INS Betwa, INS Beas P8I aircraft and Seeking Helos are continuing with search and rescue operation for the personnel from Barge P305.

"Operations can be challenging but our work is to ensure that we prepare for the contingency. We have been able to save another 300 lives at sea. Two other vessels were in distress, they were about to abandon ship and we assured them support," Commodore Manoj Jha, who led rescue operations off Mumbai coast, said.

"The rescue operations continue. Our ships and aircraft are at work. Not only the Navy but also Coast Guard, ONGC ships are working. It is a joint operation," he added.

Amit Kumar Kushwaha, who was rescued from Barge P305, said "The Barge was sinking, so I had to jump into the sea. I was in the sea for 11 hours. After that the Navy rescued us."

The Barge P305 started drifting after its anchors gave way off the Heera Oil Fields in Bombay High as cyclonic storm Tauktae brushed past the western coast. The rescue operations by the navy were undertaken in extreme weather conditions and in very rough seas.

The cyclone's intensity has weakened by today but heavy rains are likely to continue with wind speeds reaching 125 kilometres per hour, the weather department said.

Cyclone Tauktae has impacted the weather conditions in several parts of Northern India. Many areas like Uttar Pradesh, Haryana, Rajasthan and Delhi are likely to witness rainfall in the coming few hours.