Sugar Export Restrictions: Govt Notifies Capping of Sugar Exports at 10 Million Tonnes for This Year; Exports to Be Allowed with Special Permission 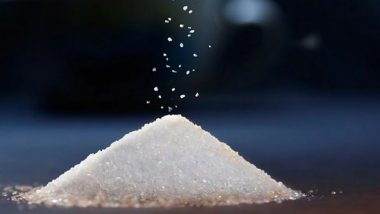 New Delhi, May 25: Amid historically highest exports, the Centre on Wednesday said it has notified capping of sugar exports at 10 million tonnes in the current marketing year ending September to maintain the domestic availability and price stability. The notification was issued by the Directorate of General of Foreign Trade (DGFT) late at night on May 24.

As per the DGFT notification, sugar exports will be allowed with effect from June 1 till October 31 this year or till further order, whichever is earlier, with specific permission of the Directorate of Sugar under the Food Ministry.

According to the Food Ministry, the decision came in the light of record exports of the sugar. Sugar exports in the 2021-22 marketing year are "historically highest". Exports in 2020-21 stood at 7 million tonnes and 5.96 million tonnes in 2019-20. India Restricts Sugar Exports at 10 Million Tonnes For First Time in 6 Years.

"Taking into consideration unprecedented growth in exports of sugar and the need to maintain sufficient stock of sugar in the country as well as to safeguard interests of the common citizens of the country by keeping prices of sugar under check, Government of India has decided to regulate sugar exports w.e.f. June 1, 2022," it said.

Sugar mills and exporters need to take approvals in the form of Export Release Orders (EROs) from the Directorate of Sugar, Department of Food and Public Distribution, the ministry said in a statement. The decision will ensure that the closing stock of sugar at the end of September 2022 remains at 6-6.5 million tonnes, which is 2-3 month stocks required for domestic use.

For sugar export from June 1 to October 31, Export Release Orders will be issued to exporters on receiving application through a transparent method and these orders would be placed on a website of the Department of Food and Public Distribution, according to a letter written to exporters by the Food Ministry.

The ministry said sugar exports up to May 31 will be allowed. Further in the case of exports through bulk or break-bulk vessels, if the shipping bill is filed and vessels have already berthed or arrived and anchored in Indian ports and their rotation number has been allocated as of May 31, such vessels will continue to proceed for the loading and export of sugar without any approval or release order.

Exporters can apply for EROs through the National Single Window System portal and no request for a change of ERO will be entertained. The validity of EROs issued will be up to the date of Let Export Order (LEO) under the contract agreement or 90 days, whichever is earlier, as per the statement.

Non-implementation of ERO or non-export of sugar under ERO within LEO date will be viewed seriously and such exporters may be penalised under the Essential Commodities (EC) Act 1955 or the Sugar Control order 1966, it added.

"Any breach of the above conditions for export by an exporter, would invite blacklisting of the exporter and would disqualify them from further participation in OGL export besides inviting action under the EC Act and Sugar Control Order," the ministry said.

The ministry mentioned that the government has been continuously monitoring the situation in the sugar sector, including production, consumption, export and price trends in wholesale and retail markets all over the country. India has been the highest producer and the second-largest exporter of sugar in the world in the current year.

The government is committed to maintain stable prices of sugar in the domestic market, and in the last 12 months, prices of sugar are under control, it said. Wholesale prices of sugar in India are range-bound between Rs 3,150 - Rs 3,500 per quintal, while retail prices are also within control in the range of Rs 36-44 in different parts of the country, it added.