Gujarat Chief Minister Vijay Rupani on Saturday resigned from the post, over a year before the state goes to polls. 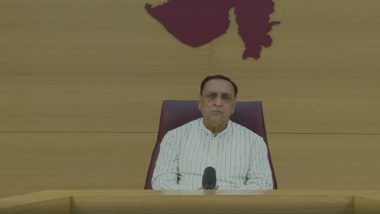 New Delhi, September 11: The Aam Aadmi Party and the Congress' youth wing on Saturday said the change of guard in Gujarat signals the end of BJP rule in the state. Gujarat Chief Minister Vijay Rupani on Saturday resigned from the post, over a year before the state goes to polls. It is not clear what prompted the development in Prime Minister Narendra Modi's home state where elections to the 182-member Assembly are due in December next year.

The AAP has made inroads in Gujarat politics, winning 27 seats in the Surat Municipal Corporation in February. While the BJP retained power by winning 93 seats in the 120-seat SMC, the Arvind Kejriwal-led AAP won the remaining 27 seats. The Congress, which had won 36 seats in SMC last time, was reduced to zero seats. Also Read | Who Will Be The Next Gujarat Chief Minister? Here Is List of Probables Who May Succeed Vijay Rupani.

The reset button that the BJP has pressed on governance in the wake of the COVID-19 wave, which also saw a major overhaul by Prime Minister Narendra Modi of his own Cabinet, continues as Vijay Rupani on Saturday became the fourth chief minister to go.

As the party works to refurbish its governance model, the move to drop Rupani as Gujarat's Chief Minister, after easing out two chief ministers in Uttarakhand and one in Karnataka in the last few months, contrasts starkly with its decision to remain unyielding in backing its chief ministerial picks during Modi's first term despite trenchant voices against some of them.

Political watchers believe the changes highlight the BJP leadership's analysis of the ground feedback and its readiness to address them, even though a final word on the shake-up can only be delivered at the elections.