According to The Hollywood Reporter, the 34-year-old actor will make his directorial debut with the new movie in addition to reprising his role of boxer Adonis Creed. 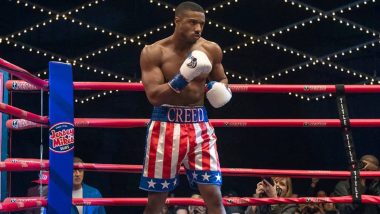 Hollywood star Michael B Jordan is set to assume the director's chair for the third part of his Creed franchise. According to The Hollywood Reporter, the 34-year-old actor will make his directorial debut with the new movie in addition to reprising his role of boxer Adonis Creed. "Directing has always been an aspiration, but the timing had to be right. 'Creed III' is that moment - a time in my life where I've grown more sure of who I am, holding agency in my own story, maturing personally, growing professionally, and learning from the greats like Ryan Coogler, most recently Denzel Washington, and other top tier directors I respect. All of which sets the table for this moment," Jordan said. Without Remorse Trailer Out! Michael B Jordan Stars in Amazon Prime Video’s New Action Film (Watch Video).

The actor further said that the "Creed" franchise, which spawned out Sylvester Stallone's "Rocky" series, is "deeply personal" for him. "I look forward to sharing the next chapter of Adonis Creed's story with the awesome responsibility of being its director and namesake," he added. Besides Johnson, actors Tessa Thompson and Phylicia Rashad will also return as Biance and Mary Anne Creed, respectively. MGM has set a release date of November 23, 2022 for the movie that is being written by Keenan Coogler and Zach Baylin based on an outline by Ryan Coogler. Michael B. Jordan Birthday: From Human Torch to Killmonger – 5 Impressive Roles Essayed by the Actor.

The franchise started with 2015's "Creed", which also featured Stallone as Rocky Balboa. The Ryan Coogler-directed movie, which was both a sequel and a spin-off to "Rocky" movie, told the story of Adonis "Donnie" Johnson, the son of boxer Apollo Creed, who was the arch rival-turned-friend of Stallone's Rocky Balboa.

Upon its release, the movie was praised by both the fans and the critics, particularly for Johnson's performance and Coogler's direction.

A sequel, titled "Creed II" and directed by Steven Caple Jr, debuted in 2018 with Johnson and Stallone coming back. Stallone will not be coming back for the third chapter as he had announced that "Creed II" marked his last outing as Balboa.