He also went on to reveal why he did not name David Warner as a member of his side. 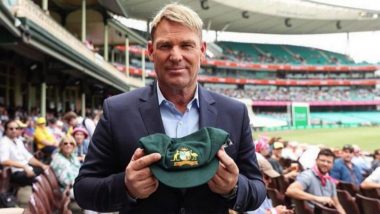 The 50-year-old Warne named Merv Hughes as the 12th member of the side. Warne picked Matthew Hayden and Michael Slater as the openers of the side. He also went on to reveal why he did not name David Warner as a member of his side. "I am only picking players that I played with that is why David Warner is not going to be a part of the side, he is one of the greatest Australian openers," Warne said while naming the side on Instagram Live.

Naming the middle order, Warne opted to go for Ricky Ponting, Steve Waugh, Mark Waugh, and Allan Border.Talking about Steve Waugh, Warne said: "Steve was more of a match saver than a match-winner".

Talking about Bruce Reid, Warne said: "If you don't know about Bruce, I would like to tell you, he has the same record as Ryan Harris".The former Australian spinner also revealed that he will be naming his greatest Ashes XI on Tuesday during an Instagram Live session.