The Oscar-winning filmmaker shares Satchel, 26, and Jackson, 23, with his wife, producer Tonya Lewis Lee. The couple were married in 1993. 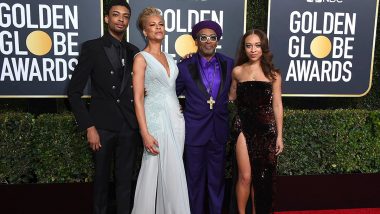 Satchel and Jackson Lee, the daughter and son of Hollywood filmmaker Spike Lee, will serve as ambassadors for 2021 Golden Globes ceremony. The Oscar-winning filmmaker shares Satchel, 26, and Jackson, 23, with his wife, producer Tonya Lewis Lee. The couple were married in 1993. They are the first siblings of colour to be named Globes ambassadors. Jackson is the first Black male ambassador.  As per the Hollywood Foreign Press Association, which organises the award ceremony every year, the ambassadors will assist with duties during the 78th Annual Golden Globe Awards ceremony and work to raise awareness around philanthropic causes of their choosing. Oscars 2021: Academy Awards to Take Place on April 25, 2021 and the Ceremony Won’t Be Virtual

"This year has illuminated just how disproportionately Black and brown people and the LGBTQ+ communities are affected by pre-existing conditions, so it's an honour for me to be able to shine a spotlight on the heroic doctors and nurses at Callen-Lorde who work tirelessly to care for some of the most vulnerable people in New York City," he said. Jackson has chosen the mentoring network Big Brothers Big Sisters of America. Grammy Awards 2021Shifted to March Due to Rise in COVID-19 Cases in Los Angeles

"Having my dad as a mentor inspired me to choose Big Brothers Big Sisters, a charity built upon the foundation that forming positive, intergenerational relationships can have a profound impact on young lives," Jackson said.

Both organisations -- Callen-Lorde Community Health Centre and Big Brothers Big Sisters -- will receive a grant from the HFPA for USD 25,000, totalling USD 50,000 donated on the Lees' behalf. Ali Sar, President of the HFPA, said the organisation is proud to welcome Satchel and Jackson as Golden Globe Ambassadors.

"Akin to their esteemed filmmaker father known for his uncompromising and provocative storytelling, Satchel and Jackson have already begun to blaze their own paths in the arts. "We are honoured to see how they'll use this platform to elevate the important issues of LGBTQIA+ health and youth mentorship," he added. The annual Golden Globes ceremony, to be hosted by Tina Fey and Amy Poehler, will be held on February 28.