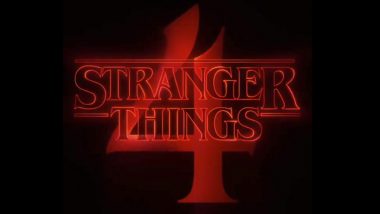 Netflix's insanely popular series Stranger Things is beefing up its cast as it heads into season four. The show has recently added four new reoccurring stars. As per Variety, the hit Netflix series has cast Amybeth McNulty, Myles Truitt, Regina Ting Chen and Grace Van Dien. The new season is currently in production in Atlanta. McNulty will play Vickie, a cool, fast-talking band nerd who catches the eye of one of our beloved heroes. Stranger Things Season 4 New Teaser Brings Eleven Back to Dr Brenner and Her Rainbow Room Days (Watch Video).

Truitt will play Patrick, a Hawkins basketball star who has friends, talent, and a good life, until shocking events send his life spiraling out of control. Ting Chen will play Ms Kelly, a popular guidance counselor who cares deeply for her students, especially those struggling the most. Van Dien will play Chrissy, Hawkins' High lead cheerleader and the most popular girl in school. But beneath the seemingly perfect surface lies a dark secret. David Harbour Birthday Special: From Stranger Things to Brokeback Mountain, 5 Performance of This Emmy Winner That We Are in Love With!

'Stranger Things' was created by The Duffer Brothers and is produced by Monkey Massacre Productions and 21 Laps Entertainment. The Duffer Brothers serve as executive producers on the series alongside Shawn Levy and Dan Cohen of 21 Laps Entertainment as well as Iain Paterson. Netflix is yet to set a return date for the series, whose third season debuted in July 2019, though it has released a creepy teaser trailer for season four.