Scott said that China is militarising the South China Sea, even though it had promised former president Barack Obama not to do it, and now it continues to try to assert its military dominance in its quest for world dominance. 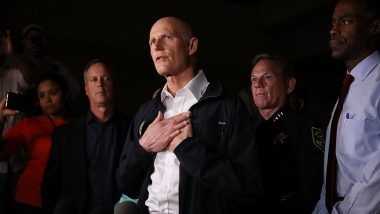 Washington, July 3: An influential American Senator on Friday said that the US stands with India against the Chinese aggression in eastern Ladakh along the Line of Actual Control, commending the Indian government for the continued efforts to negotiate a peaceful resolution to the boundary issue.

“The United States stands with India as you fight against the Communist China's aggression and I commend your continued efforts to negotiate a peaceful resolution,” Scott said in the letter tweeted on Friday.

“Unfortunately, we know Communist China never lives up to its commitments. The tyrants of Communist China continue to steal technology and refuse to open their markets to foreign goods as required by their agreement to be part of the World Trade Organisation,” he wrote.

China, he alleged, continues to attack religious freedom by detaining more than one million Uyghurs in internment and reeducation camps and have not lived up to the agreement to give Hong Kong autonomy and freedom, he said.

Scott said that China is militarising the South China Sea, even though it had promised former president Barack Obama not to do it, and now it continues to try to assert its military dominance in its quest for world dominance.

Yesterday I wrote to Indian PM @narendramodi expressing my condolences for the loss of 20 soldiers last month during the Chinese assault in the Galwan Valley.

The US supports India, the world’s largest democracy and our ally, as they stand strong against Communist China. pic.twitter.com/yiak6NvK21

“Communist China believes that in order for them to be strong, America, India and other freedom loving countries must be weaker. They are cracking down on freedom and autonomy in Hong Kong, and continue to threaten Taiwan and India,” he said.

If it continues down this path, Communist China's neighbours will have no choice but to treat it as a serious threat that uses military force against peaceful democratic powers, he wrote in the letter.

“As you continue to stand against Communist China and General Secretary of the Communist Party Xi (Jinping), I want to offer help in any way I can to the Republic of India, the world's largest democracy and our ally. The United States will always defend our allies and those fighting for freedom,” Scott added. Why PM Modi 'Did Not Name China' in Address to Jawans in Ladakh? Congress' P Chidambaram Asks.

The Indian and Chinese armies are locked in a bitter standoff in multiple locations in eastern Ladakh for the last seven weeks. The tension escalated manifold after 20 Indian soldiers were killed in a violent clash in Galwan Valley on June 15. The Chinese side also suffered casualties but it is yet to give out the details.