After the tremendous sale of four-wheelers during the festival season, many car companies such as Tata Motors, Audi, Toyota, MG Motor India have planned to launch their four-wheeler models in the Indian market this month. 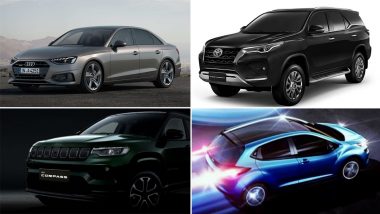 The year 2021 begins, so does new decisions of auto companies. After the tremendous sale of four-wheelers during the festival season, many car companies such as Tata Motors, Audi, Toyota, MG Motor India have planned to launch their four-wheeler models in the Indian market this month. Companies like Tata Motors & BMW are rumoured to introduce their several new models in the country this year. Let's take a look at new cars that are getting launched in India this month. BMW to Increase Vehicle Prices in India by Up to 2% from January 2021.

The upcoming Audi A4 will be launched in India on January 5, 2021 and is likely to priced at Rs 46 lakh (ex-showroom). The car is expected to come with a 2.0-litre, 4 cylinders, turbo petrol engine that will generate 190hp of power and 320NM of peak torque. It will rival the likes of Mercedes-Benz C-Class, newly launched wheelbase versions of BMW 3 Series, Volvo S60 and JLR Jaguar XE. Audi A4 will be introduced with 7-speed twin-clutch DSG transmission.

Toyota Fortuner Facelift India launch is scheduled for January 6, 2021. Toyota's new two-wheeler will feature a 2.8-litre turbo diesel engine that is said to produce 204hp of power, peak torque of 500Nm. The petrol engine variant will come with a 2.7-litre unit which will provide 166hp of power and 245Nm of torque. Toyota Fortuner Facelift will be offered in manual, automatic transmission with both engine options. The upcoming Toyota's Facelift will compete with MG Gloster, Ford Endeavor, Mahindra Alturas G4 and Isuzu MU-X facelift.

Every leader has a unique way of leadership. While for some it’s style, for others it’s power. Keep watching this space for true legends that have mastered the fine art of leadership.https://t.co/tGrAQP8JUi #PowerPackedLeader #PowerUnleashed #Toyota #StyleIcon #ComingSoon pic.twitter.com/GKAZpTkB5Q

Tata's new Turbo petrol variant of the Altroz will be introduced on January 13, 2021. Prices of the new car are likely to start from Rs 8 lakh (ex-showroom). The new car is expected to come with a 1.2-litre turbo petrol engine which will generate 110hp of power, 140Nm of peak torque and dual-clutch automatic transmission.

BMW 3 Series Gran Limousine will be offered with a 2.0 litre, 4 cylinder turbo petrol engine that will produce 255bhp of power and 400Nm of peak torque. In addition to this, the two-wheeler is also expected to get a 2.0-litre turbocharged engine with 8-speed automatic transmissions. The car will compete with Jaguar XE, Volvo S60, Audi A4 & Mercedes-Benz C-Class. The car will be launched in India on January 21, 2021.

(The above story first appeared on LatestLY on Jan 01, 2021 01:43 PM IST. For more news and updates on politics, world, sports, entertainment and lifestyle, log on to our website latestly.com).