The British Academy instituted a jury for their Breakthrough Initiative in India that opened the door for a much wider array of nominees under the categories of Film, Television, and Gaming! 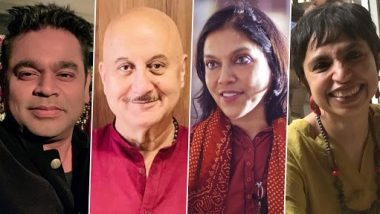 The British Academy of Film and Television Arts (BAFTA) today announced the illustrious list of jury members for its debut BAFTA Breakthrough India initiative, supported by Netflix. Distinguished professionals from across the film, games and television industries came together to select this year’s talented honourees. The Jury was chaired by BAFTA Breakthrough India Ambassador, A R Rahman.

“BAFTA is a platform where artists from around the world, including the best from India, are represented and celebrated, and it’s my honour to be a part of its Breakthrough India jury. There are many creatives in India who are looking to bring their art to the world, to showcase India’s vibrant and diverse culture, but unfortunately, they face traps both mental and external. The opportunity to discuss these blocks, to engage on issues of creativity, to make the right connections, to network and grow, would greatly benefit the plethora of talent we have in our country." said AR Rahman

He also continued, "Through Breakthrough, we offer artists our knowledge and connectivity, as well as opportunities that’ll hopefully nurture their craft and help them leave their mark on the world. India is home to incredible artists and I’m proud of us. It’s time we make our names known, it’s time we all shine." AR Rahman Speaks to LatestLY on 99 Songs, When He Pulled a Viral Prank on an Anchor And His Love for Music (Watch Exclusive Video)

BAFTA invited candidates from across the country to apply for their flagship talent initiative ‘BAFTA Breakthrough India’. Due to an overwhelming number of quality applications from the films, games and television industries nationwide, the initiative will recognise not five but ten emerging Indian talents across the three industries.

The ten chosen BAFTA Breakthrough India honourees will receive one-to-one mentoring and career guidance, full voting BAFTA membership and access to BAFTA events and networking opportunities, both in the UK and internationally. Due to the ongoing Covid-19 pandemic, the jury met virtually, bringing together a diverse mix of national and international knowledge across the film, games and television industries. Anupam Kher Shares a Message of Hope for Fans, Says ‘There Is Light Despite All of the Darkness!’ (View Pic)

Siddharth Roy Kapur, BAFTA Breakthrough India juror said, “ "There is such depth of talent in India with an incredible diversity of life experience and very often this talent does not find an outlet to shine, without access to those who can facilitate and encourage them. The BAFTA Breakthrough India programme will give emerging talent unprecedented opportunities to connect with and learn from the very best in the world. I was proud to be part of such an intensive, well intentioned and substantive jury deliberation process, with all my fellow jurors having taken the time and effort to review each candidate so closely. The final selection was difficult because there was so much outstanding talent to choose from, but I am incredibly excited with the final list of chosen honourees, each of whom I believe has the ability to make their mark on the global stage in the years to come. "

(The above story first appeared on LatestLY on Apr 19, 2021 06:06 PM IST. For more news and updates on politics, world, sports, entertainment and lifestyle, log on to our website latestly.com).