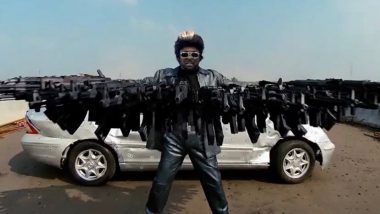 Will i am in Action Music Video (Photo Credits: YouTube/Screengrab/Black Eyed Peas)

American band Black Eyed Peas recently dropped a new song "Action" and while the foot-tapping number is making their fans groove to it, it is the song video that has become a bigger talk of the town. The lead member of the band, William Adams, better known as will i am shared the music video on Twitter on August 7 and revealed how he has always been inspired by Indian culture and particularly Indian cinema, thus sharing why the band's latest music video celebrates Rajinikanth's Robot, Ajay Devgn's Singham and other films using Deepfake app. 45 Years Of Rajinism: Mohanlal, Sivakarthikeyan, AR Rahman, Prithviraj Sukumaran and More Share Common DP Celebrating Rajinikanth's Milestone Achievement.

Sharing the music video, Will i am wrote, "Check out our video for #ACTION inspired by #BOLLYWOOD…ive always loved music from india…#Elephunk and #MonkeyBusiness were inspired by Indian Culture…thank you india for your vibrancy and contribution to the world." Further sharing this video, A Rahman commented, "The borders are blurring through art! #tamilcinema @directorshankar #rajnikant #india.”

For the uninitiated, the music video consists of epic action scenes from Indian films such as Robot, Ambala, Singham and also Swedish film Kopps. Ever since its release, the music video has been driving Indian fans crazy, who are loving this amazing tribute to Indian cinema. Here's looking at how netizens have reacted to this. AR Rahman on His Debut as a Film Producer with 99 Songs: ‘Felt Like I Was Starting All Over Again’.

The #blackeyedpeas have released the music video for their song Action. The video is a treat for their Indian fans as it uses footage from five different Indian action films and combines it with deep fake technology.

The YouTube description for "Action" also states that the band has been highly inspired by Indian artists such as A R Rahman and Asha Bhosle. The description further states, "This video for ACTION shows our LOVE and appreciation for BOLLYWOOD and the imagination and awesomeness it brings to the screen." Do tell us if you liked this Indian cinema ode by Black Eyed Peas in comments.

(The above story first appeared on LatestLY on Aug 10, 2020 10:22 AM IST. For more news and updates on politics, world, sports, entertainment and lifestyle, log on to our website latestly.com).