Priyanka Chopra-Nick Jonas or Alia Bhatt-Ranbir Kapoor: Which Couple Are You Vouching For? Vote Now

Alia Bhatt and Ranbir Kapoor or Priyanka Chopra and Nick Jonas- Who is your favourite couple? 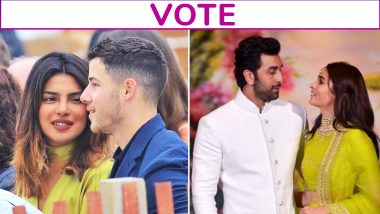 Alia-Ranbir, Priyanka-Nick - Who is your favourite couple? (Photo credit: Instagram)

With Ranbir Kapoor confessing to this "new thing" he has with Alia Bhatt and Priyanka Chopra making it official by going out on dates with Nick Jonas, looks like love is indeed in the air! The same celebrities, who prefered to keep their relationship under wraps at one point of time, are now coming out in open about their current love affair and we cannot admit the fact that we are absolutely loving it!

I mean, for the longest time, Ranbir Kapoor never admitted to dating Katrina Kaif. They even moved in together and were spotted at their love nest back then a couple of times, but the actor always remained tight-lipped about Kat. However, it came to us as a shock when Ranbir confessed that Alia and him are dating. Well, neither did Miss Bhatt ever made it official with her then-boyfriend Sidharth Malhotra.

Same was the case with PeeCee when she was rumoured to be dating Shahid Kapoor. They were apparently together during the shoot of Teri Meri Kahani, which may be long-forgotten, but the rumour of their love affair is still not. Nonetheless, we are absolutely loving this new version of our B-Townies!

Priyanka Chopra and Nick Jonas are among one of the hottest couples in Hollywood while Alia Bhatt and Ranbir Kapoor's frequent outings too are setting tongues wagging here! While PC and Nick are still in the initial phase of dating, Alia and Ranbir are already bonding with each other's families!

While we absolutely love both the couples, we want to know who are you vouching for! So, participate in our Twitter poll here and vote now and tell us, Alia Bhatt and Ranbir Kapoor or Priyanka Chopra and Nick Jonas- Which couple are you rooting for?

(The above story first appeared on LatestLY on Jun 12, 2018 11:29 AM IST. For more news and updates on politics, world, sports, entertainment and lifestyle, log on to our website latestly.com).