Cargo is a science fiction film that is written and directed by Arati Kadav. Anurag Kashyap is one of the producers for the film, while Vikrant Massey and Shweta Tripathi Sharma take on the lead roles. Cargo is streaming on Netflix. 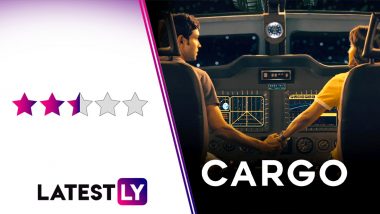 Cargo Movie Review: The last time I saw a spaceship in Bollywood, it was in Shirish Kunder's Joker, and like everything about the film, it was unintentionally hilarious. The first thing that impressed me the most about director Arati Kadav's Cargo is the the spaceship where nearly all the action is set - Pushpak 634A. For a film made on a very modest budget, Pushpak 634A was a very impressive design, reportedly inspired by a jellyfish. We also get a scene where Vikrant Massey's character is seen repairing the spaceship while floating in space, another awesome visual. Cargo Trailer: Vikrant Massey, Shweta Tripathi’s Netflix Film Looks Impressive, Thanks to the Fresh Blend of Sci-Fi and Indian Mythology.

The interiors of the spaceship may look more like a set, but whenever we see Pushpak 634A from the outside we get a clear indication of Kadav's grandiose vision, criminally limited by the money. And the ingenious premise is a glimpse into her extraordinary imagination.

Cargo, which good good reviews at MAMI Film Festival 2019, was picked up by Netflix and has started streaming on the platform from September 9. 'Cargo' of the title represents the dead souls, or rather dead humans with both their bodies and souls intact, being transported to recycling centre for them to be reborn.

The task of transporting the 'Cargo' falls on spaceships like Pushpak 634A, piloted by demons or rakshasas like Prahastha (Vikrant Massey), who work for Post Death Transition services. In the beginning, even before the credits appear, there is a text about how demons have futurized themselves and how human and demons have come to the agreement.

Watch the Trailer of Cargo here:

Not sure if it was Netflix who added it, or the makers, but it comes off very confusing. It dilutes the lore that the movie does a better job in establishing ahead.

Anyway, moving on, Prahastha has been in the job for too long, a loner who meticulously transports his cargo, without getting attached to their stories. Interestingly, the film also has an advert about The Loneliness Detective, that serve as sly subtext to Prahastha's situation. Prahastha's one constant companion is the mission control operative Nitigya (Nandu Madhav) whom he communicates through visual transmissions. Cargo: Vikrant Massey and Shweta Tripathi's Science Fiction Film to Release on Netflix On September 9; Check Out the Announcement With a Mirzapur 2 Twist!

Things change for him when the company sends him an assistant - a female astronaut Yuvishka (Shweta Tripathi Sharma). Yuvishka, who is a fan of Prahastha, is full of life, social-media friendly and exuberant. She also has healing powers. Her arrival also brings some enthusiasm into the film, that was reflecting Prahastha's somber attitude in its tone as well.

Initially, Prahastha's rigid working style and loner attitude clashes with Yuvishka's by-the-book ways. Slowly, he warms up to her presence, though he is unsure of how to rein her in. Unlike Prahastha, Yuvishka finds trouble keeping a stoic attitude towards the 'cargo', which soon begins to affect her healing powers. Prahastha also makes a startling discovery as to why the command centre has sent Yuvishka to Pushpak 634A.

The premise is pretty crazy, and those well-versed in Hindu mythology can grasp a chuckle at two at the mention of some popular names. Like for example, a popular popstar in the Rakshas world is called Surpanakha. Or Yuvishka's younger brother is called Ghatotkach. Even Prahastha is a lesser known entity from Ramayana, the son of demon king Ravana who used to own Pushpaka Vimana. Geddit?

So looking at the above blend of mythological references with sci-fi fantasy, Cargo has the potential to play around with the quirkiness of its premise. At times it does. At times, it serves occasional doses of black humour. You would also be reminded of films like Andrei Tarkovsky's Solaris, Duncan Jones' Moon and even Robert Eggers' The Lighthouse, while watching the movie. Vikrant Massey Birthday: 5 Performances of the Actor That You Need to Check out!

Overall, though, the narrative is uneven, as it is something difficult to discern if the film wants to be a meditative piece on loneliness, a whimsical take on afterlife and reincarnation, or being a strange, sly satire on government offices. There were plenty of potentially brilliant ideas in Cargo, but not all gets fruitification. The movie is captivating when we see Prahastha and Yuvishka grapple with their inner demons (geddit?) individually. But the monotonous and often repetitive nature of the screenplay does little to spruce up interest.

The premise would also fall apart if you really begin to question it all. Like how come the 'cargo' accept their fates immediately, even though they were alive just seconds ago? Or how do cellphone networks work in the spaceship, especially for the dead? Or why the demon powers feel like an afterthought in the story, rather than something that could have been explored more?

What works, though, for Cargo is Arati Kadav's appreciative effort to veer towards unconventionality, and in delivering a film that is a stunning departure from Bollywood's usual fare. If only that vision was backed by a more engaging narrative, this would have been a masterpiece. Another plus point is Shezan Shaikh's BG score, that's worthy of a sci-fi. The earnest performances of both Massey and Tripathi gel well with what their characters demand. Nandu Madhav gives a very amiable performance.

- A Fascinating Vision Backed By Decent VFX and BG Score

- The World Leaves You With More Questions

Cargo has all the makings of the cult film, it is after all a fascinating anomaly in the formula-loving Bollywood. A more uncluttered screenplay would have worked wonders here. Still, a bold effort from the filmmaker to show that creativity can't be limited by something as frivolous as budget. Cargo is streaming on Netflix.

(The above story first appeared on LatestLY on Sep 09, 2020 12:30 PM IST. For more news and updates on politics, world, sports, entertainment and lifestyle, log on to our website latestly.com).