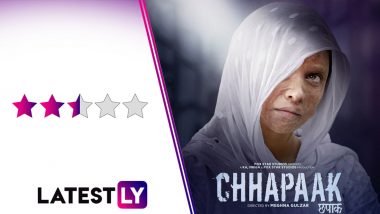 Chhapaak Movie Review: Don't know how strange a coincidence it is, but the opening sequences of Deepika Padukone's Chhapaak, directed by Meghna Gulzar, reflects the volatile headlines of these times. If our country is seeing protests from the students over the CAA act and JNU violence, then Chhapaak begins with college students fighting for justice for Nirbhaya and facing police action. But the movie isn't about Nirbhaya, it is about Malti (Deepika Padukone), an acid attack survivor who is inspired by a real-life survivor and activist, Laxmi Agarwal. Chhapaak recounts her life from 2005 to 2013, as Malti transitions from an acid-attack victim to a role model for all the survivors. Fact Check: Deepika Padukone's Acid Attacker in Chhapaak is NOT Rajesh, But Bashir - Here's The Full Truth.

When she was 19-year-old, Malti has been a victim of a heinous acid attack. We are not shown the attack itself then (at least not initially). Instead, we see the aftermath of the attack with Malti screaming in pain, with a splash of water makes her scream even more. The whole scene is heart-rending, enhanced by Arijit Singh's title track playing in the background. It is an immensely powerful sequence that makes you squirm in your seats. The scene evokes a very strong emotion in you, and you really want to punish those who left her in this condition. And it feels even more heart-breaking when you learn one of Malti's assailants happened to be a woman.

(FYI for all Deepika trolls, while the character names have changed, their religious identities remain the same. It doesn't matter though. The religion for all such a-holes are just one - perversion)

The sequences in the first half that follow are also immensely effective, from the police investigations to the court sessions. What I appreciate about Chhapaak as a movie is that it not only highlights the ferocity of the crimes, the struggles of the victims and the perversions of the attackers, but also how the law itself unfairly bracket such cases with incidents of grievous bodily harm.

When the Nirbhaya protests from the opening scene are happening, we see a man who is insistently showing the picture of his daughter, an acid attack victim, to a news reporter. Through this scene, Chhapaak dutifully highlights how the trauma of acid attack survivors don't get the same attention as rape victims, even if the savagery of the crimes are nearly the same.

Strangely, though, it is the courtroom sequences that feel more impactful than Malti and her family coping with the trauma. Though the scene where she sees her reflection for the first time, post-surgery, will touch your hearts.

Watch The Trailer of Chhapaak:

While the first half doesn't delve into the 'why' of Malti's tragedy, I felt it wasn't needed. The movie itself points out that the assaulters have reasons from hurt egos to suppressing the fairer sex, and in the case of Malti, the investigations did give a hint as to why she was attacked. Which is why, the climax where the backstory is shown takes away some of the storytelling impact. Instead, we get to see Deepika looking very out-of-place as a teenager in the backstory portions. Perhaps the idea was to show Deepika without the prosthetics (good job by the makeup team), but the scene would have been rendered more effective if a newcomer had been cast in the role. Which was not the case here.

It is not just the finale; the second half itself feels weaker compared to a very moving first half. The portions feel more like a social campaign and docudrama merged together, even though it is littered with a few good moments. Malti's family gets almost sidelined. The romantic track of Malti with her NGO boss Amol (Vikrant Massey), despite some nice banter, feels under-developed, just like his character.

I really appreciate the film for highlighting the social causes surrounding acid victim-survivors and impudence of these crimes. I got to learn a lot about them through this film. But that shouldn't affect the storytelling in any way, and here's where I feel that Chhapaak, unfortunately, is an opportunity not well-utilised. The use of a melodramatic approach in certain scenes feels a forced attempt to invoke emotions. The approach seems very by-the-numbers. Even Meghna's direction in these portions feels oddly okayish, making Chhapaak her weakest film after her last two incredible efforts in Talvar and Raazi.

While I didn't want to go for comparisons, these flaws of Chhapaak made me go back to last year's Malayalam film, Uyare, a much superior film that also had an acid attack victim-survivor as the protagonist. It may not be based on a real person, but Uyare beautifully encapsulates the fighting spirit of these girls while telling a compelling story. Interestingly, both Deepika and Parvathy, the leads of these two films, had shared a roundtable discussion a few weeks back.

Deepika Padukone pitches in a strong performance that helps us in easily empathising with her character. Check out that scene where she smiles for the first time after her ordeal. Even in that rare display of happiness, we feel a jolt in our stomach. Or that lovely scene where she confronts a stoic Amol, who tells her off for celebrating a legal victory, saying that it is her victory to celebrate. Wonderful act there! There are occasions where the star in her almost threatens to surface, but thankfully, Deepika keeps it simple and strong.

Vikrant Massey is very effective, though I wish his character could have been more than just a catalyst and a romantic interest. Among the supporting cast, Madhurjeet Sarghi as Malti's strong-willed lawyer and Ipshita Chakroberty as a diminutive bundle of hatred leave an impact.

- An Effective First Half

- A Weak Second Half

- Doesn't Leave The Impact That You Expect

Chhapaak is a story that deserves to be told and highlights a cause that needs to be heard. Deepika Padukone is in fine form, and the supporting cast also sparkles. If the storytelling and pacing had been stronger, then Chhapaak could have made a bigger splash.

(The above story first appeared on LatestLY on Jan 10, 2020 03:41 PM IST. For more news and updates on politics, world, sports, entertainment and lifestyle, log on to our website latestly.com).