Did Kangana Ranaut Use Google Image To Flaunt A Smoothie She Made? Here's The Fact Check Behind Viral Tweet

Kangana Ranaut took to Twitter and shared a picture of a self-made smoothie that looked delicious. However, netizens claimed, she copy-pasted the picture from Google. So, did Kangana lifted a smoothie image from online; here's the truth behind the viral tweet. Read on. 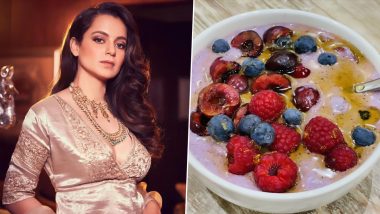 Whatever Kangana Ranaut does becomes a huge topic of discussion. Be it slamming a celeb or sharing her personal experience, she's known to churn news. However, little did she know that her summer smoothie tweet wherein she posted an image of the delicacy will garner negative attention. As netizens started to troll her for picking a ready picture of the smoothie from Google and uploading it on her Twitter. However, as per a report in Alt News, Ranaut did not copy-paste, but instead, it was her self-made fruit smoothie bowl. FYI, the recipe is called ‘Spring Acai Bowl’ and it is popular across the globe.  Kangana Ranaut vs BMC: Maharashtra CM Uddhav Thackeray Is No More Welcome in Ayodhya, Says VHP.

As explained on the website, they searched and pointed out how a user mentioned that Kangana lifted the preparation image from an Australian website kuvings.com.au, but that ain't the reality. As the troll had morphed the image to prove the B-townie wrong. All that being said, we wonder, who has time to literally plan all this to ridicule Kangana over a smoothie? Phew!!! Kangana Ranaut Claims She’s Not Getting an Architect To Re-Build Her Bandra Office, Cites BMC Threats As the Reason.

Hahahaha can’t believe some people are mistaking this picture from my van this morning for some international professional chef’s famous blog, I knew I am good but sooo good like a professional.... seriously had no clue. Thrilled to know I am awesome at everything that I do ❤️ pic.twitter.com/hmBok2Rr0S

Not hatred I genuinely believe they don’t hate me, it’s those naughty 20 ruppees they get per tweet for spreading fake propaganda and smear campaigns against me which are the real culprit. https://t.co/a9FIUDGc7L

Well, all we would like to say is that the internet is a tricky place and not every time what the user comments is right. Celebs are usually trolled online and even if they are mentioning the truth, the force of the Twitterverse is so strong that we turn deaf. The same case was with Kangana here. So, the next time she posts another smoothie bowl, you know what NOT to do. Stay tuned!

(The above story first appeared on LatestLY on Mar 04, 2021 06:27 PM IST. For more news and updates on politics, world, sports, entertainment and lifestyle, log on to our website latestly.com).