Ganesh Acharya Opens Up About His Body Transformation and Losing 98kgs, Says ‘I Actually Felt Energetic’

Bollywood choreographer Ganesh Acharya is in full swing promoting his film Dehati Disco. He said he has a lot of hopes from the movie doing well and also appealed to the audience not only in the Hindi speaking belt 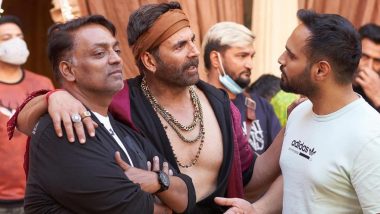 Bollywood choreographer Ganesh Acharya is in full swing promoting his film Dehati Disco. He said he has a lot of hopes from the movie doing well and also appealed to the audience not only in the Hindi speaking belt but also in the South. Ganesh talked about his experience of working in the film and also opened up on his weightloss journey. He said it was not easy, but he worked out and put all efforts into making it possible. Ganesh Acharya in Legal Trouble; Mumbai Police File Chargesheet Against Choreographer in Sexual Harassment, Stalking and Voyeurism Case.

Ganesh said in a media interview that after losing weight he is getting good work. "After losing 98 kilograms I actually felt energetic and all charged up. This was the best phase to take up a high volume of work and also pursue a little bit of acting." Ganesh made his film debut with 'ABCD: Any Body Can Dance' and also got a lot of appreciation for the choreography of the song, 'Malhaari' from 'Bajirao Mastani'. Zayed Khan Calls Hrithik Roshan His ‘Mentor’ as He Undergoes Major Physical Transformation (View Pics).

Despite playing the lead in his latest film, Dehati Disco, he finds dance more close to his heart. "Surely being fitter has changed a lot of things for me, but my passion for dance was there even when I was on a heavier side," the choreographer said in an interview. Dehati Disco starring Ganesh Acharya and 'Super Dancer 3' finalist Saksham Sharma is directed by Manoj Sharma, produced by Gitesh Chandrakar, Vaseem Qureshi and Kamal Kishor under banner Qureshi Productions Pvt Ltd and One Entertainment Film Productions.

(The above story first appeared on LatestLY on May 23, 2022 02:42 PM IST. For more news and updates on politics, world, sports, entertainment and lifestyle, log on to our website latestly.com).