A hilarious satire on society -- 'Jayeshbhai Jordaar', produced by Maneesh Sharma, also stars 'Arjun Reddy' fame Shalini Pandey, who debuts on Bollywood's big screen opposite Ranveer Singh. The film has been directed by debutant Divyang Thakkar and is releasing on May 13. 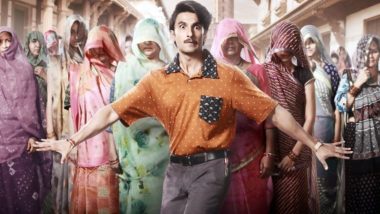 The Delhi High Court on Tuesday allowed the release of Ranveer Singh-starrer 'Jayeshbhai Jordaar' with new disclaimers added to it as it showed the use of ultrasound technology for gender determination in certain scenes. The bench comprising Acting Chief Justice Vipin Sanghi and Justice Navin Chawla was hearing a public interest litigation (PIL) by an NGO 'Youth Against Crime' filed through Advocate Pawan Prakash Pathak. Jayeshbhai Jordaar: Delhi High Court Allows Release of Ranveer Singh’s Film With New Disclaimers.

Though the film promotes the "Save Girl Child" slogan and is against female foeticide, the trailer of the film advertises the use of ultrasound technique, as per the petitioner. The plea said: "The ultrasound clinic scene where the technology of ultrasound for sex determination is being advertised openly without censor and as per section 3, 3A, 3B, 4, 6 and 22 of the PC and PNDT Act, same is not allowed and hence the instant PIL."

After a detailed hearing of the matter on Tuesday, the bench said: "We appreciate the message but you have to tell people that it is an offence." "The learned senior counsel, without prejudice to his submissions, has agreed to depict a further static warning or disclaimer during the running of both the scenes... The senior counsel submits that similar warning or disclaimer will be depicted on all formats in the trailer and on YouTube...Respondent-4 (producer) is bound by the statements made by the senior counsel on its behalf," the bench added.

In the order, the court told the producers of the film to ensure the disclaimers twice in the film. During the course of the hearing, Anurag Ahluwalia representing the Centre, said the film has been certified by the CBFC subject to the insertion of a disclaimer. Jayeshbhai Jordaar Trailer: Ranveer Singh, Shalini Pandey’s Social Drama With an Important Message Will Make You Laugh Hard! (Watch Video).

During the court hearing on Monday, the court said: "There is nothing to show in the trailer that the lady is taken to the doctor clandestinely.. What is coming out is, any pregnant woman can be routinely taken to the clinic centre with sonography machine and this can be done without any fetters." "Unless we see for ourselves and are satisfied, we are not going to permit this. You seek instructions or otherwise, we will have to stay this," the bench had said.

A hilarious satire on society -- 'Jayeshbhai Jordaar', produced by Maneesh Sharma, also stars 'Arjun Reddy' fame Shalini Pandey, who debuts on Bollywood's big screen opposite Ranveer Singh. The film has been directed by debutant Divyang Thakkar and is releasing on May 13.

(The above story first appeared on LatestLY on May 10, 2022 08:36 PM IST. For more news and updates on politics, world, sports, entertainment and lifestyle, log on to our website latestly.com).