Jiah Khan's suicide rocked the nation and recently became the topic of a BBC 2 documentary Death In Bollywood. Now her sister has revealed that Sajid Khan had made a really uncomfortable suggestion to Jiah during the rehearsals of a movie that he did with him. He wanted her to take off her shirt and read the lines in her bra. 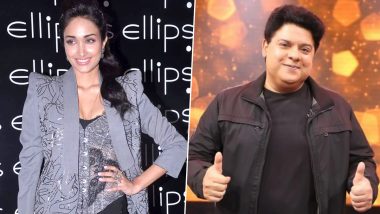 Sajid Khan has been accused of sexual harassment by several actresses but nothing much was done against him during the Me Too movement. He is still free. Even now, accusations against him haven't stopped and now we have late Jiah Khan's sister narrating an incident that's extremely shocking. Recently, BBC 2 aired a documentary named Death In Bollywood on Jiah's suicide and the case thereafter. This is one of the portions where Jiah's sister was seen talking about how the actress couldn't even get out of film even after the horrific incident. Jiah Khan’s Death Is Now A Three-Part BBC Documentary Titled Death In Bollywood; Twitterati Is Heartbroken After Watching The First Episode

Jiah's sister reveals that it wasn't Jiah who was asked to take off her top and read lines in a bra, she too had to face something extremely unpleasant because of Sajid Khan. She was wearing a strappy dress and leaned on the table. Khan took that as a hint of her wanting sex with him. Sajid definitely knows how to give you the creeps.

Reminder that Sajid Khan is not in jail yet. pic.twitter.com/cZ5I8Rrys0

Last year, model Paula had accused Sajid Khan of sexual harassment and narrated a tale where the filmmaker allegedly bragged about what he did with Jiah Khan. In an interview with Beyond Bollywood, she narrated, "He came and sat next to me. He asked me if I have a boyfriend and whether I have had sex. I was nervous and didn’t really know what to say. He told me that it’s an altogether different thing to have sex with a man. He told me that if it wasn’t for him, I wouldn’t have won the pageant. He kept his hand on my leg and started rubbing it. He said something like you know Jiah Khan stood in the same place where I stand now.”

Now with Jiah Khan's big reveal, it's evident that something unpleasant did happen between Sajid Khan and Jiah.

(The above story first appeared on LatestLY on Jan 19, 2021 02:14 PM IST. For more news and updates on politics, world, sports, entertainment and lifestyle, log on to our website latestly.com).