Kangana Ranaut Responds to Jaya Bachchan's 'Thali' Remark, Claims Roles, Item Numbers in Bollywood Used to Be Given By Sleeping With the Hero 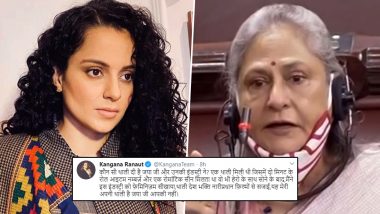 Kangana Ranaut's Twitter has been blazing with hell fury. Veteran actress and Samajwadi Party MP Jaya Bachchan called her out in the Parliament for biting the hand that fed her. "Jis thali me khate hain usi me ched karte hain," she said in her speech. She also slammed the Queen actress for calling the film industry 'gutter'. Now, Kangana has hit back at the Guddi actress. In the process, she pointed out yet another sickening practice of the industry - casting couch. Many actors and actresses have opened up about being propositioned for sex in exchange for work. Kangana's comments make it clear that she has also come across such situations. Kangana Ranaut Asks Jaya Bachchan If She Would Side With Bollywood If Daughter Shweta was 'Drugged and Molested' as a Teenager and Son Abhishek Was 'Found Hanging' (View Tweet).

On Twitter, Kangana wrote, "What thali (plate) is Jaya referring to? The one that was offered was to appear in a two-minute role, a romantic scene, item numbers -- and that too after sleeping with the hero? I taught the industry feminism, decorated the thali with patriotic films, this is my own plate Jaya ji, not yours."

Although, movies on women empowerment and feminism and patriotism were being made in India way before Kangana even joined the industry.

The remark by Kangana agitated Swara Bhasker, who is also as vocal as the former, but on the opposite end of the spectrum. Swara called it sickening and shameful that Kangana would like that to an elderly and industry senior. Swara Bhasker Reacts to Kangana Ranaut’s Reply on Jaya Bachchan’s Parliament Speech (Read Tweet).

Kangana had a lot to say to Jaya. She even questioned her if her stance will remain the same if her son Abhishek Bachchan was found hanging or if her daughter Shweta was drugged and molested as a teenager.

Swara and Jaya are not the only ones who have criticised Kangana for her remarks. Urmila Matondkar, actress and former politician, has also slammed her in various interviews. Taapsee Pannu, Anubhav Sinha, Hansal Mehta and many many more tweeted in favour of Mumbai when Kangana compared the city to PoK.

(The above story first appeared on LatestLY on Sep 16, 2020 09:24 PM IST. For more news and updates on politics, world, sports, entertainment and lifestyle, log on to our website latestly.com).