Kartik Aaryan To Team Up With Shah Rukh Khan For An Unusual Love Story: Reports

In November 2020, there were reports doing rounds citing that Shah Rukh Khan has approached Kartik Aaryan for his next production and it’s a rom-com. 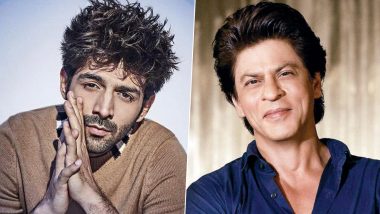 Shah Rukh Khan was last seen in the film Zero, a film that tanked at the box office. Post it, SRK has not featured in any films. But he did bankroll amazing projects (films and web-series) under his home banner Red Chillies Entertainment. In November 2020, there were reports doing rounds citing that SRK has approached Kartik Aaryan for his next production and it’s a rom-com. There has been no official update on it yet, but as per latest reports, Kartik has been finalised for the project. Shah Rukh Khan Says, ‘See You All On The Big Screen In 2021’! Fans Think SRK Is Hinting About Pathan (Watch Video).

The project will reportedly be helmed by Ajay Bahl, whose last directorial project was Section 375. Talking about the upcoming flick, a source revealed to Bollywood Hungama, “Kartik has been in talks with Shah Rukh Khan’s banner for this Ajay Bahl directed film for a while now and finally, everything has fallen in place and the actor is all set to start shooting for the film within the next two months.” The source also stated, “Though this one too has an underlying social message, it’s essentially a rom com. The casting is currently underway and the female lead as also the rest of the members will be locked soon.” Dhamaka: Kartik Aaryan Shares a Glimpse from the Sets of His Upcoming Action-Thriller (Watch Video).

Shah Rukh Khan is currently busy with the film Pathan in which Deepika Padukone and John Abraham would be seen with King Khan in the lead. Meanwhile, Kartik Aaryan also has a few films lined-up and they are Bhool Bhulaiyaa 2, Dostana 2 and Dhamaka.

(The above story first appeared on LatestLY on Jan 27, 2021 01:44 PM IST. For more news and updates on politics, world, sports, entertainment and lifestyle, log on to our website latestly.com).