Katrina and Vicky are busy in the year ahead. The actress has the horror-comedy Phone Bhoot co-starring Ishaan Khatter and Siddhant Chaturvedi. Vicky will be seen in Sardar Udham. 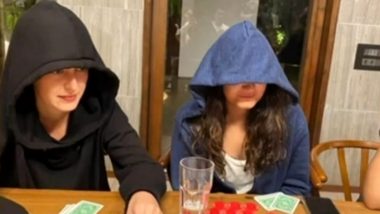 Actress Katrina Kaif reportedly first posted and then deleted a photo featuring her rumoured boyfriend, actor Vicky Kaushal, on Instagram. Vicky Kaushal Dating Katrina Kaif? Here's What a Friend has to Say about their New Relationship.

Katrina put up the image on Instagram Stories but soon deleted it. Her fans managed to capture a screengrab of the photo and posted it on their fan club account on Instagram. In the photo, Vicky's reflection is visible.

"Zoom the picture to see a reflection of @katrinakaif and @vickykaushal09," read the caption of the post. One fan commented: "Aww... #vickat #victrina." The rumoured couple are reportedly on a vacation accompanied by their siblings Isabelle Kaif and Sunny Kaushal. Pics of Katrina Kaif and Vicky Kaushal Paying a Visit at a Friend’s Residence Hit the Internet, and Netizens Declare Them as ‘Beautiful Couple’.

Katrina and Vicky are busy in the year ahead. The actress has the horror-comedy Phone Bhoot co-starring Ishaan Khatter and Siddhant Chaturvedi, besides the Akshay Kumar-starrer cop action-drama Sooryavanshi, lined up. Vicky will be seen in Sardar Udham and a biopic of Field Marshal Sam Manekshaw. He has an untitled comedy, too, opposite Manushi Chhillar.

(The above story first appeared on LatestLY on Jan 04, 2021 03:35 PM IST. For more news and updates on politics, world, sports, entertainment and lifestyle, log on to our website latestly.com).