Koffee With Karan Season 6: Anushka Sharma and Virat Kohli to Spill The Beans For KJo? 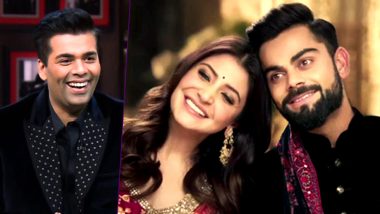 Look who is likely to grace the hot couch of Karan Joahar's popular chat show Koffee With Karan! KJo is all excited about the sixth season of his popular chat show and if reports are to be believed his team is trying to get none other than team India captain Virat Kohli and his wife, Bollywood actress, Anushka Sharma. It will be interesting to see  the star couple getting chatty and spilling the beans. But will it ever happen?

Karan is currently busy judging the reality show India's Next Superstar. Plus he has a host of other commitments to look after. With schedules as busy as his, fans were wondering if the chat show master will ever come up with the next season of Koffee With Karan.  Sources also maintained that KJo will take the much needed break from TV landscape, post which he will be gracing the host seat of the chat show and welcome the celebrity guests to chat with them.

Conjectures are also rife that Karan will take the much needed break to commence his next directorial ventures, the details of which are still under the wraps. Perhaps he will be also be ruminating over the guest list of KWK 6.

If a little birdie is to be believed Karan Johar is keen to get Virat and Anushka to open the show. Interestingly, Anushka has said in an official statement through her spokesperson that she will not appear on KJo's show with hubby Virat.  It is also reported that Kjo is employing all his might to get the starry couple on the show and the talks are also on to convince Virat and Anushka to be on the show. But will this idea materialize? Wait and watch is the call on that one at the moment!

(The above story first appeared on LatestLY on Mar 26, 2018 05:53 PM IST. For more news and updates on politics, world, sports, entertainment and lifestyle, log on to our website latestly.com).