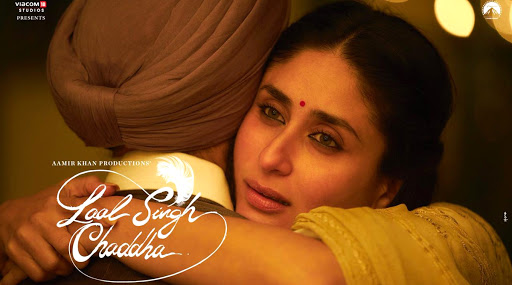 Aamir Khan has a big treat for Valentine's Day and it is all set to pique your interest into his upcoming film, Laal Singh Chaddha to the peak. On the occasion of this special day, the actor has dropped a new poster of Lal Singh Chaddha. The film is certainly special given that it brings to the screen one of the most loved on-screen couples, Kareena Kapoor Khan and Aamir after 3 Idiots. The new poster features Aamir and Kareena's characters in an embrace. We are loving how expressive Kareena's eyes look in this beautiful poster. Aamir Khan Seeks Blessings at the Holy Golden Temple Taking Time From Laal Singh Chaddha Shoot (View Pics).

As we already know, Laal Singh Chaddha is a remake of Tom Hanks' Academy Award-winning film, Forrest Gump starring Tom Hanks in the lead. Given Aamir's brilliant acting skills, we are expecting the actor to nail this role. Sharing the new poster on Twitter, Aamir wrote, "#HappyValentinesDay Kareena. I wish I could romance you in every film... comes naturally to me Love.a." Aamir Khan Shares The First Look Of Forrest Gump Remake Laal Singh Chaddha, The Film To Release On Christmas 2020 (Watch Video).

Check Out the New Poster:

बस इतना सा है, ज़िंदगी का सफर।#HappyValentinesDay Kareena. I wish I could romance you in every film... comes naturally to me ;-)

If the beautiful poster was any less, Aamir's cute message for Kareena Kapoor Khan is sure to melt your hearts too. As for the film, we have already seen Aamir in similar getups to that of Tom Hanks where he was sporting long hair and a heavy beard too. It is certainly going to be interesting to see how the story will be adapted in the Indian context. The film is being directed by Advait Chandan and is all set to release over Christmas this year.